It all began with a Facebook post on how overwhelmingly white the Oscars were this year. It should not have seemed out of character to my Facebook community, made up of friends, family, ex-boyfriends, and that person I met at a party one time in college. I regularly post my pro-Bernie Sanders rhetoric, far left political feminism, in tandem with videos of puppies. It received a “like” or two before I left the house to go to the Natural History Museum with my Dad who was visiting. Walking through the dinosaur exhibit, I received a text from my partner:

My partner: Looks like you hit a nerve with Tim*.

Tim is an acquaintance. He is a Facebook over-poster, over-liker, and self-proclaimed anti-feminism “centrist,” who had only a few days before sent me at least fifteen paragraphs of notes claiming that all women are raised with a chip on their shoulder, and inferred that a systematic bias in favour of women was at the root of mass shootings perpetrated by men.

I could not make this up if I tried.

He had apparently taken issue with my most recent post.

“this isn’t about race this is about human nature. clubs look out for themselves and you cannot blame them for it.”

“no one is owed anything…thats why clubs exist in the first place, u know?”

“you seem to be emotionally attached to the idea that everyone and everything should be the same when they just aren’t. its hard to talk about a patriarchy when male and female brains are different you know?”

“what really bothers me from this is you seem so actually racist towards white people who have made it towards the end of their life?…like you’ve been indoctrinated into a bitter hateful club that needs to see shit burn lol(hope u take that in the somewhat joking tone I meant it).”

“and the patriarchy or ‘old boys club’ is a myth from a ‘funded college course’. these are myths presented to you in a way that you will adopted them emotionally because at your core you’re a good caring person, but there’s nothing actually scientific or based about them.”

“I would bet you still believe women earn less than men? if that’s true you might want to reexamine the schema you’ve adopted because it’s just not the case”.

“I’ll say it until someone listens…this aggressive behavior by some people trying to make everything equal…is throwing things so far out of balance that on average every single day one or more young boys wakes up feeling like his only option is to destroy his surroundings.”

My partner came home from work that night, and joked that he should post a comment about how work must really be slow for Tim. I jumped at that thought. All day I had been barraged with comments by this person, attacking everything about me as a woman of colour. Men I assumed to be my friends and allies had “liked” some of Tim’s comments. I felt like I was out on a limb, all by myself, banging my head up against a wall, screaming, while someone did their best to drown my voice out.

My partner is a kind, quiet, open hearted, white man from a small town in Ontario, who generally doesn’t like to get involved in politics. We’ve been together for over a year, and he always makes a concerted effort to take an interest in the things that excite me, whether they’re independent films, politics, or pop culture. I don’t think he knew what he was getting into when he started dating this half Indian, half white, Muslim liberal feminist with a megaphone mouth. He loves me, and I know he tries, but his mistake was thinking that race and gender equity are merely “interests” of mine. As a woman and a person of colour, I was not given the choice to take an “interest” in race relations and gender disparity. I live both of these experiences every day, and I am reminded of how I am different in every form of media I turn to.

I come from an upper middle class loving family, I went to a top university, and I have always lived in multicultural cities where there are members of my race within my community. I have a secure job, I make enough money that I don’t have to live paycheque to paychecque, and I receive substantial healthcare benefits. I am the only woman at my company, but my voice and my opinions are respected by my male colleagues. I am a cisgender and heterosexual woman, and so I can love and marry whomever I like, and my sexuality and gender are rarely violently policed. I am privileged in many ways, but unlike my partner, or my community of friends (made up largely of white men and women) my attention to both race and gender is integral to how I live in the world; not something I can opt into and out of at will.

I realized that I had expected my partner to see that Tim’s words are the same oppressive words women of colour see, and hear, throughout their lives. If we are passionate, we are called emotional. If we fight for representation in a field devoid of racialized people, we are told we’re attacking the white people who have succeeded in those fields.

I huffed and I puffed. I went to bed without eating dinner, and I fumed over my inability to articulate why I felt so betrayed. I love that my partner believes I can take care of myself and that I don’t need a man to fight my battles, but that day, I needed an ally. I felt zero outrage from him. I wanted him to know I could handle things myself, but to also feel protective of me and my beliefs. Why wasn’t he angrier? Why wasn’t he defending me? He should have known that I needed his support.

I never anticipated having to discuss white privilege with a boyfriend. I have almost exclusively dated white men, but this is my longest relationship. For the first time I have imagined what my life would look like ten years from now, and he’s in it. I even think about what it would be like to have kids with him. Would my children be Muslim, and go to religious classes the way I did? I don’t go to Mosque anymore, and I might even consider myself more of an atheist these days, but these are questions that I am considering for the first time. For the first time, I couldn’t just ignore the uncomfortable conversation. It mattered because if he couldn’t be an ally, then he couldn’t be my partner.

It took me the next day, and the following Google searches to find the words to explain what I was feeling:

The Internet is a tricky beast. For every article I found that aligned with my dilemma, I found five others rallying the cry of the impoverished and ignored white man. I wasn’t looking to join the Oppression Olympics, I just needed a little help explaining my frustration to my partner without blaming him.

I know the title alludes that I have the answer to how to discuss white privilege with your partner – at least better than I did, but I definitely don’t have the answer.

The next day I did speak with him honestly about how my life experience has been different than his, and I encouraged him to read a few of the articles I found online. I know he will, because it is important to me. Our relationship is a work in progress, and because there is an overwhelming amount of love there, I am able to be understanding of his ignorance on the topic. I can empathize with my partner’s hesitation to speak up for something he knows very little about. He’s afraid he’ll sound stupid, and do more harm than good, so he stays quiet when these topics arise. We need our allies to not just think it, but to say it, so that others can hear it. A hands-off feminist, or a silent racial ally, doesn’t help us. It hurts us. It is my hope that learning and understanding his own place in the racial landscape, even if it’s initially just to make me happy, will ultimately lead him to seek out ways to be ally, all on his own.

Last night while brushing our teeth, I asked him:

“If you were on the street and somebody came up to you with a survey, and asked if you called yourself a feminist, would you say Yes, No, or Maybe?”

He replied, “Yes. Of course I would. I thought you knew that already?”

*Name has been changed.

Bianca is a Canadian living in Venice Beach, California, and runs the business development for a music licensing startup. She originally hails from Vancouver but lived in Montreal and Toronto before defecting south of the border. A voracious news media consumer, and a passionate progressive, she recently realized she had something of importance to contribute to the collective conversation. When she’s not traversing the perils and joys of being an expat, you can find her Instagramming puppies, and failing at a juice cleanse.

Via Tumblr. This image captures the sentiments of this tweet. 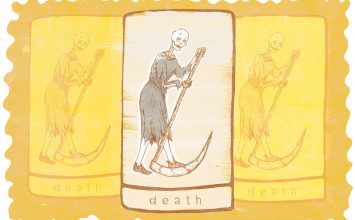 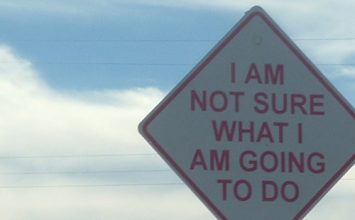 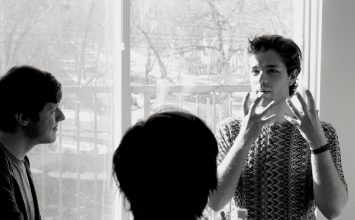