“Truly amazing, what people can get used to, as long as there are a few compensations.” – Margaret Atwood, The Handmaid’s Tale

It’s way past midnight on a weeknight in late fall 2016, and I am deep in online discourse with my xiaomei (Mandarin term of affection meaning “little sister”) about the Galloway affair and rape culture in the Canadian literary landscape. Xiaomei isn’t my blood sister—in fact, she isn’t even Chinese—rather, she’s a younger trans woman with whom I have developed a bond that spans the divide between friendship and mentorship, in the way that many relationships between trans girls do: the secrets of womanhood and survival pass from girl to girl in a chain forged of trauma and danger and love.

Xiaomei and I share the experience of being trans, but our sisterhood is made even more special by the fact that we are also both writers. Xiaomei is, like a lot of trans youth, wiser than her years, but there are occasional moments when she looks to me for advice of the older-sister kind.

In those moments, I am not just the trans gal pal with whom she chats online at all hours of the night and early morning. I am her Da Jie, even if I am only twenty-five years old to her twenty, and I hold that responsibility with alternating reverence and terror.

Tonight is one such moment. Xiaomei has been impacted by the Galloway affair, like many folks in our generation of queer and feminist writers. She is infuriated by the participation of feminist icons, such as Margaret Atwood and Miriam Toews, in Joseph Boyden’s letter defending Galloway, and inflamed by the reminder that a professor in her own university creative writing program is notorious for sexually coercing female students.

Among the things that Xiaomei and I share is a history of our own experiences of sexual violence, as well as a complicated relationship with the mainstream conceptualization of sexual assault—trans women are frequently demonized as sexual predators and rapists in both feminist and mainstream culture.

But Xiaomei is a girl with a sense of social justice and a brave heart. She wants—demands—to know: What can we, as Canadian trans women writers working on stolen Indigenous lands, do to stop rapists in the literary community?

I close my eyes in front of my laptop screen and look into the place where I store big sisterly advice. To my surprise and my shame, I find my whole body crying out, we don’t stop the rapists. We stay quiet, we write our stories, we hope to get published, and we survive.

A few years ago, before my first book was published, a writing mentor took me out for lunch in Montreal. I admire this woman so much. She is brilliant and kind, and life has carved lines of wisdom into her skin that she expertly conceals with flawless makeup.

I was distraught that day because the night before, a famous Canadian writer with many books published and an excellent reputation had made sexual advances toward me at a poetry reading. He insinuated that he could get me published, make me famous. In a room full of artists, he told me, loudly, that he wanted to “suck a lady cock.” No one moved or said anything. Neither did I.

I asked my mentor, this wise feminist, what she thought. What I should do. Was I being oversensitive? Was this all in my head? Should I address it?

She paused for a moment. She told me that she believed me, and that I was not being oversensitive. And then she said, gently, “Sometimes women have to make hard choices to be writers.”

Since Fall 2016, the Galloway affair has been pored over in agonizing detail by the Canadian literary establishment. Articles in national newspapers and arts and culture magazines have analyzed the fallout through a spectrum of lenses, from generational difference to gender to class, while Facebook and Twitter became political battlegrounds that tore open relationships between Canadian writers.

The debate around Galloway’s innocence in the matter of the sexual assault of one of his students has sparked a much larger conversation within the CanLit community about the growing need for change in the way sexual violence is understood and addressed among writers. The role of men as perpetrators of harassment and assault has been scrutinized—as it frequently is in social justice circles—with many women (and plenty of male) writers denouncing women, such as Atwood and Governor General’s Award-winner Madeleine Thien, who have defended Galloway.

They include the writer who made those advances on me, and several who were in the room at the time.

I’m not writing this as a denunciation, a social justice one-up, or a call-out. I don’t really believe in such things anymore. I’m not angry. I’m curious.

What happens between women to make us turn on one another? Why would women like Atwood or Thien defend Galloway? Why would the women who disagreed with them so publicly have failed to protect me in private? What does silence buy us? What does hypocrisy?

Whom have I failed to protect?

It is an open secret in the CanLit community that powerful men, and also some women, in the literary arts scene do sexually violent—or at least, compromising—things, particularly in regard to younger, vulnerable writers. This is true of any tightly knit community I have ever been a part of, from artistic to literary to queer communities.

To be honest, I was at first surprised about the amount of publicly vented outrage that the Galloway affair generated, not because outrage is uncalled for, but because I was under the impression that this was a norm, a cruel rite of passage in the places we call home.

Why else would the more established women writers around me have said nothing when, at a writing residency in the United States, a white male editor bought me a sexualized Oriental dress and demanded that I wear it to a private dinner for two?

(I did wear it. He published my poetry in his magazine.)

Why else would I have done nothing, except to quietly cut off contact with this editor, when I found out a year later that he was in a relationship with a teenage student in the university class he taught?

Here’s the less open secret about sexual violence in small communities like CanLit: silence is a currency. The silent are paid in survival, and a few in success. We benefit from our silence, like children receiving candy or cash from an abusive parent. Those who refuse to be silent usually disappear.

We tell ourselves that it’s not so bad. After all, we went through some of it. We tell ourselves we’re not to blame. Cognitive dissonance, the aching desire to believe in our own goodness and that of the community that has built us, convinces us that the bad things never happened—until suddenly, they burst open right before our eyes.

I chose to say nothing about what happened to me, and now I have a book published and two more on the way.

When would a woman refuse to defend another woman? When her own safety and reputation are on the line. When she is confronted with the possibility that the same establishment that made her prosperous and proud is built on the exploitation of her sisters.

Women on both sides of the CanLit controversy are, I think, bound by culpability – the culpability of complicity. How many of us have made those difficult choices in order to become writers? To get published? To survive?

Activism that calls out specific violent individuals and demands justice from institutions is essential. But true justice—a safer world for women and people of all genders to grow and create—can never be found without looking into our own hearts. As we turn our rightfully angry gaze toward those who cause and uphold harm, we might also ask ourselves: whom have we failed to protect?

And how can we do better next time?

It’s early 2017, a sexually violent bigot has assumed authoritarian control of the most powerful nation in the world, and while the Galloway affair has receded (for now) in the mainstream media, Xiaomei and I are still talking. She still wants—demands—to know what she can do, how she can be trans, a woman, and a writer in this shattered world without compromising her values.

This is not a question I know the answer to, but I want to try to find it. Xiaomei is only five years younger than me, and already she is making hard choices to be a writer. She shouldn’t have to.

It’s 2017, and it looks like women in this world will have to make hard choices for a long time to come. We might as well make brave ones. So that someday, girls will never have to choose between speaking and survival.

Kai Cheng Thom is a writer, performer, and social worker based in Toronto and Montreal, unceded Indigenous territories. She is also a lasagna lover and wicked witch. She has contributed to such publications as Buzzfeed, Autostraddle, Matrix Magazine, and Asian American Literary Review. She is the author of Fierce Femmes and Notorious Liars: A Dangerous Trans Girl's Confabulous Memoir (Metonymy Press), a place called No Homeland (Arsenal Pulp Press), and the children's book From the Stars in the Sky to the Fish in the Sea (Arsenal Pulp Press). 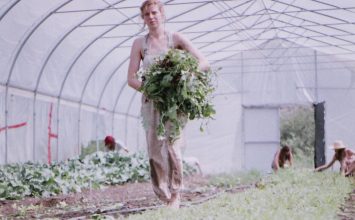 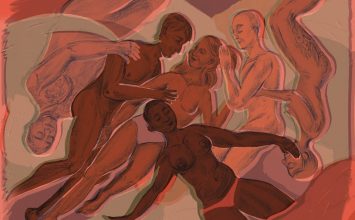 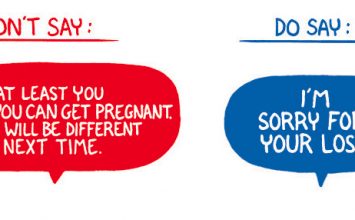 WHAT NOT TO SAY AFTER SOMEONE HAS A MISCARRIAGE