Today is the Trans Day of Remembrance, Resilience and Resistance – we honour and remember those who have lost their lives to anti-trans violence, and we celebrate the creativity and brilliance of trans and gender nonconforming people everywhere. There are vigils happening in many cities, and at tdor.co, you could buy some gorgeous art in support of a range of organizations who fight for trans liberation.

For me, this week has been disappointing and painful in for a number of reasons. One of them was seeing the swastikas and racist graffiti spraypainted on a mosque, synagogues and churches in my hometown of Ottawa. A teenage boy has been charged, and I’m struck by how much pain and fear one person can create, if they want to.

In Val D’Or, Quebec, the Indigenous women and men who took the brave risk of coming forward to speak about the sexual assault and physical abuse that they suffered at the hands of police in their community have been betrayed by the decision this week not to prosecute any of the police who committed these crimes.

In a world that so systematically refuses to believe the survivors of sexual assault, and refuses to enact ANY consequences against its perpetrators, it is incredibly disappointing to see so many of the Canadian authours whose work I love sign this open letter that asks UBC to make public the accusations that led to the firing of creative writing professor Steven Galloway, implies that the allegations are all false, and offers no sign of support for the victims of sexual violence.

It’s particularly hurtful to see Margaret Atwood describe the responses to this public letter that engage with its flaws and limitations as a “witchhunt” and “bullying”. Zoe S Todd has some excellent writing on the letter and its ramifications for rape culture within Canadian universities, and a great interview in Quill & Quire about the responsibility of professors and teachers in protecting the well-being of their students.

“I refuse to join any social movement that silences and hurts women who have brought forward complaints related to harassment or assault – where they study, work, walk or live.” Lawrence Hill brought forward this seemingly simple point, Briarpatch Magazine has ended their relationship with Joseph Boyden in response to his signing of the letter, and Room Magazine has begun a  powerful series entitled No Comment, featuring poetry and prose in response to the culture of rape within the Canadian literary community.

I’m also re-reading Emma Healey’s Stories Like Passwords this week: “An abusive relationship is a closed loop. So is a professional network. So is the patriarchy.”

The New Inquiry has been publishing vital reflections on the US election, and our shared futures. Some of the most powerful pieces include:

Hanif Willis-Abdurraqib’s The Day After The Election I Did Not Go Outside:

make a border around any place you are loved & call it yours.

make a border around those who hold you up & build what

you must to keep the devils out.

Refuse reconciliation to ongoing brutality. Refuse to feast on the corpse of others. Rend the fabric of the kinship narrative. Imagine otherwise. Remake the world. Some of us have never had any other choice.

When the time comes, use your own body to protest and vocally interrupt any prospect of renewing a registry; intervene with your body if you see someone experiencing harassment. Learn to de-escalate. Especially if you are visibly non-Muslim. Understand that where anti-terror legislation begins, the rights of Muslims, even citizens, end. Begin to take risks in solidarity with your community; know that wherever you are, Muslims are a part of that community.

And Jenny Zhang’s Against Extinction:

If you are able-bodied, if you have money, if you have resources, if you are seen as white, hetero, cis, if you have had the opportunity to develop your politics through theory rather than through forced violations against your body and your people, then take that backseat, offer a share of your resources to help organizers and activists travel and stay sheltered, protect and stand with communities you are not from, but do not take up space. Humbleness is what fuels a courageous fight that does not center you as savior.

I have found these sets of resources on intervention and deescalation helpful, as well as this, on how to talk to loved ones about the Trump presidency.

“We are different—so different that air can be denied us, and our rights seem fluid.”  We Are Not The Same

Mykki Blanco on trusting your own talent

A home-schooled 19-year-old who is against abortion and Ontario’s new sex-ed curriculum is now a Conservative MPP in Niagara.

Check out Vetch, a magazine of trans poetry and poetics.

“It’s my fundamental responsibility to speak up against and call attention to and try to unpack the inequities of the world. The best shorthand for what I’ve just said is that my only way to be an ethical person in the world is to be an intersectional feminist killjoy. I am imperfect in my practice, it’s an ongoing evolution, but it’s absolutely necessary.” Erin Wunker in Bitch!

an incomplete inventory of methods and means to abortion—undertaken with varying levels of success and the ever-present possibility of death—in America before the passage of Roe v. Wade

“White women’s modus operandi for gaining power—economic, political, and otherwise—is simple: acquire power from those who have it. And those who have historically have had it are white men. This has resulted in white women’s historic abandonment of their black and brown sisters, as well as their more heinous adoption of white supremacist rhetoric to advance their own status.” Marcie Bianco on why white women voted for Trump

Arabelle Sicardi on the sexual politics of hair

Here’s a great project happening in Halifax: two community leaders are fundraising to bring the hosts of the Two Brown Girls podcast to the city in December for a live taping. You can support their efforts here.

How to Stay Sane While Black

Advice from Angela Davis in the wake of the election

Finally, our LOVE issue is here! We’ve released five pieces this week, with many more to come. You can check out our editorial note; as well as powerful poetry, conversations, love stories,memoirs, and zines that pull love apart and put it back together.

We love doing this work, and it’s not easy. It takes time, and energy, and resources to put together the magazine and the blog and these very links. If you are able to, please consider supporting us with a few dollars a month on Patreon—you could get some great merch, and you would be helping us to continue publishing vital voices. If you can’t support financially, sharing pieces from the magazine with friends who might be interested is a huge help for us. Thank you for reading, and for being a part of our community! 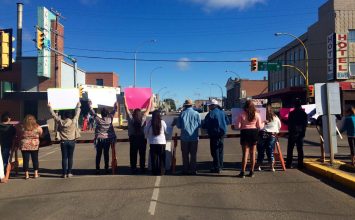 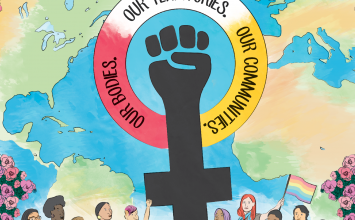