The music scene in Edmonton, Alberta is known for its underground gems, with many emerging artists coming from the city, and shining bright within it. But who is benefiting the most in this scene, and who takes up the most space?

In Edmonton (and around the world), cisgender men dominate venue spaces as performers and attendees at shows. In order to make room for more queer women, trans and non-binary individuals, the organizers of Not Enough Fest Edmonton took matters into their own hands by creating a platform for new bands featuring these marginalized identities. On February 28th this year, NEF became the province’s first music festival of its kind, showcasing a total of 16 amazing new bands.

A year ago, influenced by other Not Enough Fest’s around North America and with guidance from the how-to guide on weirdcanada.com, the seven organizers created Not Enough Fest Edmonton, after experiencing first hand, and hearing stories from other queer women, trans and non-binary folks that they did not feel comfortable at many venues, and during many shows because it was so heavily dominated by cis men, and by people that have caused harm to many folks in the past. On top of this, most of the actual performers are cis men, leaving little-to-no room for everyone else to feel safe and comfortable even trying to perform as a newly established band. So here comes NEF, first with mixers for folks in the community to mingle and share their own musical visions, then gear drives to receive instrument donations, several jam dates, a crowd-funding campaign, and then finally, the actual show that took place in a small community hall. When they started organizing the details, they had hoped for a great turn out, but nothing close to the 800 person turn-around they actually had on February 28th, from when the festival started until the end of the night. For these activists, the success of the event was incredible, but they know that there is always room for growth, improvement and changes. 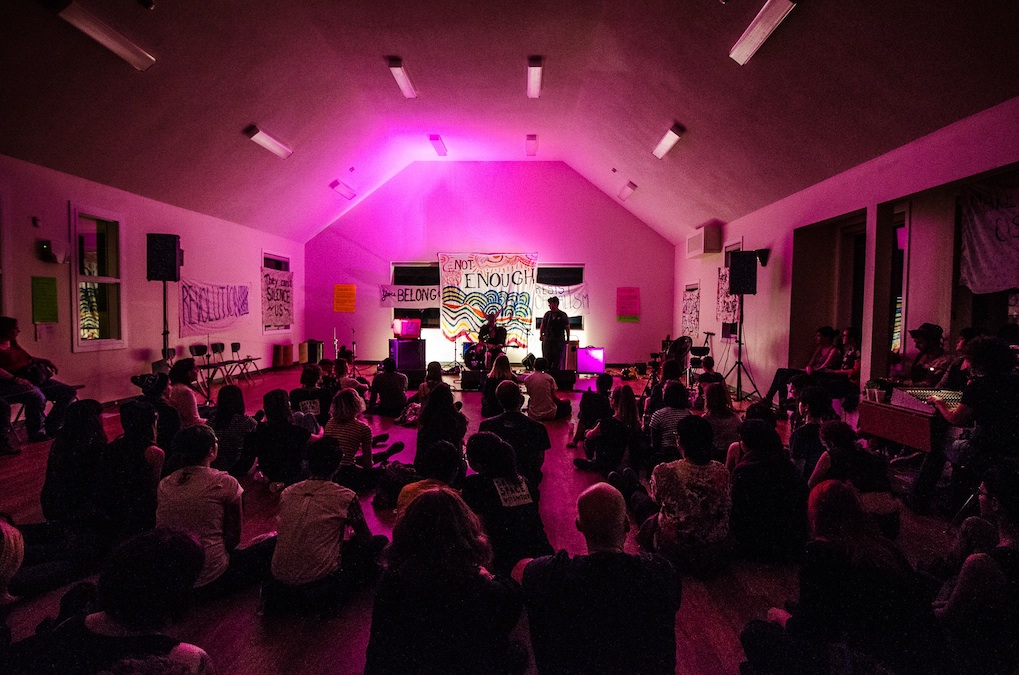 After the festival, I had the opportunity to sit down with the organizers and ask them about the process they went through to make the event happen, and what they hope to see in the future for Edmonton’s music scene for queer folks.

Congratulations on making your first year a success! Thinking back to the experience of organizing NEF, what were some of the challenges you faced?

It is important to us to be open and transparent about how the social positions occupied by the 7 organizers impacted how we organized. We are all white, predominantly cisgender, able-bodied women whose primary music connection is to the punk, hardcore and noise scene. While we attempted to address barriers faced by those excluded due, but not limited to, their gender, sexual orientation, race, class, ability, age and size we know that we were limited in our scope and practice. Having an organizing committee more reflective of those we want to see represented in the scene is essential to connecting to these communities in meaningful and sustainable ways. Having said that, we also know that Edmonton has many incredible creative communities led by artists of all abilities and genders, people of color, youth and non-punk oriented folks that may have chosen not to participate in NEF because it did not resonate with them. Being that our mandate is to amplify silenced voices we recognize that taking guidance from these pre-existing communities so that we can support them in ways that they seek is vital to creating the scene we want to see—yet we also know we fell short. As we continue to organize we are committed to working towards meaningful engagement that does not tokenize or put the burden of inclusion on these communities. We know we have much work to do and are still in the process of figuring out what this looks like. We welcome feedback and conversation regarding past and future NEF projects.

I’m sure you expected to encounter some difficulties in terms of barriers to make the festival a success, but what structural barriers did you face that you didn’t predict?

As part of our commitment to accessibility we actively sought venues that would be physically accessible to those who experience mobility limitations. This proved to be much harder than we already knew it would be. We looked for months to find a wheelchair accessible jam space and are still looking. We hosted the final event at a hall that is physically but not financially accessible in order to accommodate basic accessibility requirements. We found very few pre-existing venues that met this same standard and even fewer that were also all ages and substance free. As organizers who believe in body liberation and barrier reduction (if not elimination) we were both profoundly upset and discouraged by Edmonton’s absence of such venues and interested in participating in generative conversations around transforming and creating spaces that welcome all bodies and experiences.

The festival was committed to making space for queer women, trans and non-binary folks to make music, did this extend to prioritizing their attendance as well? Did you face any backlash (especially from, *cough cough*, the menz) as a result of this?

Not Enough Fest has always been by, for and about women, queer, trans and non-binary individuals. [S1] When we first booked the venue for NEF we imagined that a hall with a capacity of 180 would be more than enough, but by the date of the festival there were nearly 800 people attending! We wanted to prioritize the participation of women, queer, trans and non-binary individuals while being mindful of creating a situation where people may be outed, scrutinized or judged for their right to be there based on the gender others perceive them as. We also wanted to make NEF as comfortable and exciting for our new performers as possible and for many new bands that meant knowing that their supporters would be able to watch their set. In the end, we chose to appeal to the audience with a set of questions that encouraged folks to reflect on their social positions and the way they moved through the world—the goal being that individuals for whom NEF was not a uniquely valuable experience of having their identity validated by a music community would self select to make room for others. We were accused of reverse sexism by a couple of very disgruntled men who could not believe they would be asked to consider whether they belong in that space. Overall the community responded positively and on the date of the fest, the hall reached capacity many times, but there was enough movement to keep the line to a minimum. The biggest issue we had with capacity was actually that upon hearing that there were people waiting outside, many women, queer and trans people considered giving up their spot—something we imagined could happen but hoped wouldn’t. In the future we would like to consider how to better address a potential capacity issue in ways that are still sensitive to the concerns mentioned above but that more directly address those that the festival was not primarily about, whose act of showing up but leaving when needed (to make space for women, queer and trans folk) would be a tangible act of solidarity with NEF and its participants.

Where or how was Not Enough Fest’s impact seen in other areas of your creative and/or community lives?

The most obvious impact on our community lives post-fest has been seeing most of the brand new bands continue to make music and play shows. It has been great that other communities are supporting these bands by booking them, and that the new bands are excited and comfortable playing music in different atmospheres.

Since the fest we have heard from and about other show promoters who are working to make their shows safe/r spaces, encouraging and supporting more truly inclusive line-ups and audiences, and generally asking questions that we weren’t hearing pre-fest. A lot of individuals have approached us for guidance on how they can do this and safe/r spaces guidelines are popping up at shows around the city.

We have also seen the growth of a community of show goers with whom there is a shared sense of solidarity—a knowing glance, an intentional friendliness, enthusiastic support for community performers and a “grrrls to the front” and “bros fall back” attitude on taking up space. It has been amazing how much more enjoyable and encouraging the scenes we already participated in have become since NEF. 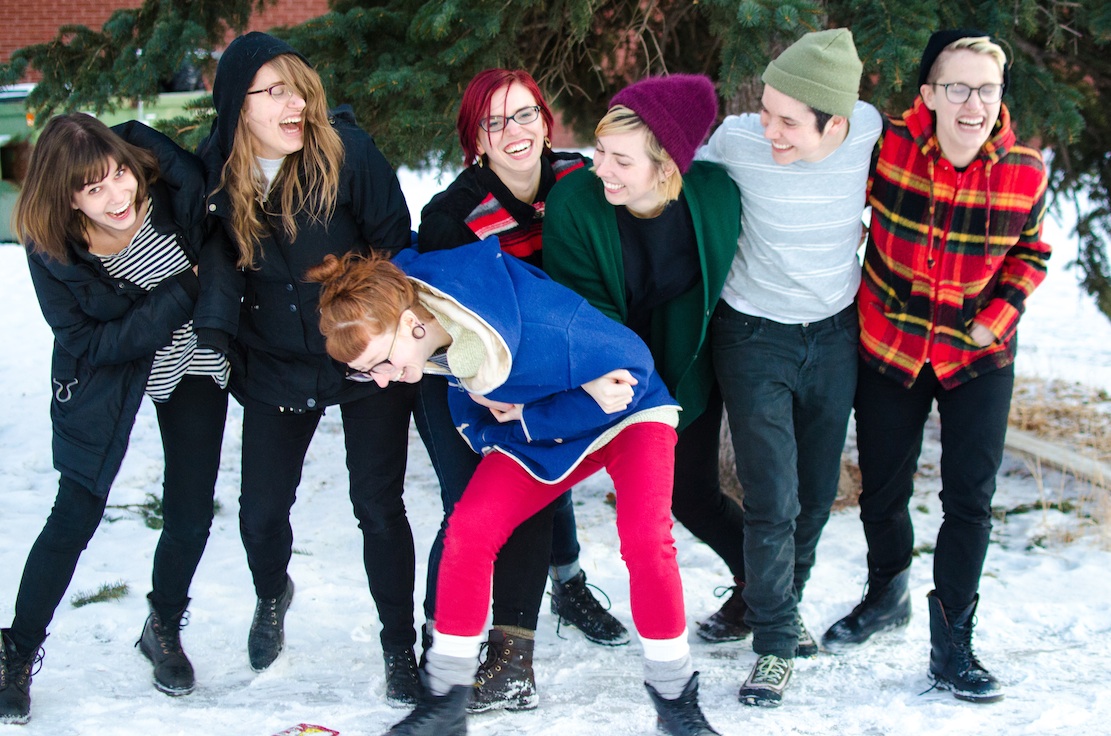 How do you envision yourselves as a group and as a festival moving forward? Are you hoping to continue to engage people with Not Enough Fest?

We have some pretty big dreams around this one! First, we definitely want to see another Not Enough Fest next year. We are and will continue to reflect on our blind spots and find ways to address them moving forward, but either way, we are excited to see NEF 2016 happen!

In the long run we have some bigger dreams around creating a sustainable community to support the continued growth of women, queer and trans visibility in our scenes. We would really like to start a venue/jam space to promote and feature women, queer, and trans artists, be a community meeting spot and host bands coming through town. This might be something a little further down the line (spaces are hard to come by), but we think it could be a great way to offer continual support and have a hand in the growth of the community!

To see what else Not Enough Fest Edmonton is up to, and to find out more about future festivals, check out their Facebook page here!

Kristina Laban is a trans*y hard femme queer who spends most of their time obsessing over miniature puppies and glitter, uses their waking hours educating and posting on social media, on stolen Treaty 6 land, about sexual health, sexuality & gender, while being totally preoccupied with selfies and laughing along the way.

A CONVERSATION WITH LAUREN MITCHELL 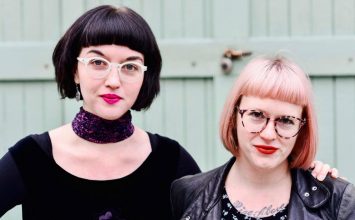 An Interview with Margeaux Feldman and Lauren Fournier 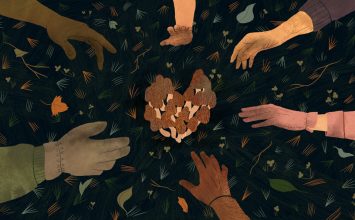