Homepage»Lives»I WASN’T WHAT THE FORTUNETELLER PREDICTED

Conversations with my mother

“You know, change is gradual,” my mother said to me as we were walking down a very steep hill, somewhere in Granada.

Earlier this year, my mother and I travelled together to Portugal and Spain for two weeks, after I wrapped up my very last semester of school in France. I had never travelled with her alone, much less spent so much time with her on my own. I was nervous that we would argue a lot, or that she would be disappointed in my (lack of) planning—that we would want to do different things.

It turned out my fear was mostly unfounded; the only disagreement we had was about the acceptability of waking up at 6:30 in the morning to walk up to El Alhambra. Before I realized, we were enjoying the view of an old palace from Spain’s Islamic period, having reached the last leg of our vacation.

Sometime during the trip, our conversations became more personal. We moved on from talking about our next meal to talking about marriage, our family, my parents’ decision to uproot our family from Korea and move to Canada during the IMF economic crisis, and my mother’s working life.

After studying English literature at the top women’s university in Korea—knowledge of the English language was, and continues to be, a highly sought-out skill—my mother got a job working for a foreign bank in the loans department. She prepared letters of credit and ensured everything was order for secured loans. When one of her managers moved to another department, however, he brought her with him. This move effectively changed her role into one of a personal assistant. Suddenly finding herself less stimulated and challenged, my mother lost her motivation and decided to leave the workforce for good.

Thinking about my mother’s trajectory now—a rare choice in Korea at the time—fills me with pride. But I would be lying if I said I appreciated her choice as a kid. I remember my five-year-old self, wishing that my mom could come to school picnics like the other moms. I remember wondering whether it was “normal” that there was a nanny at my house. I also remember admiring how fancy my mom looked in her oversized ’90s suits that made her seem different from most moms. I unabashedly loved (and still love) her work wardrobe: trying on her chunky necklaces was something I did for fun as a child. Some of her work shoes, like her low-heeled black loafers with a gold buckle, now live in my closet. 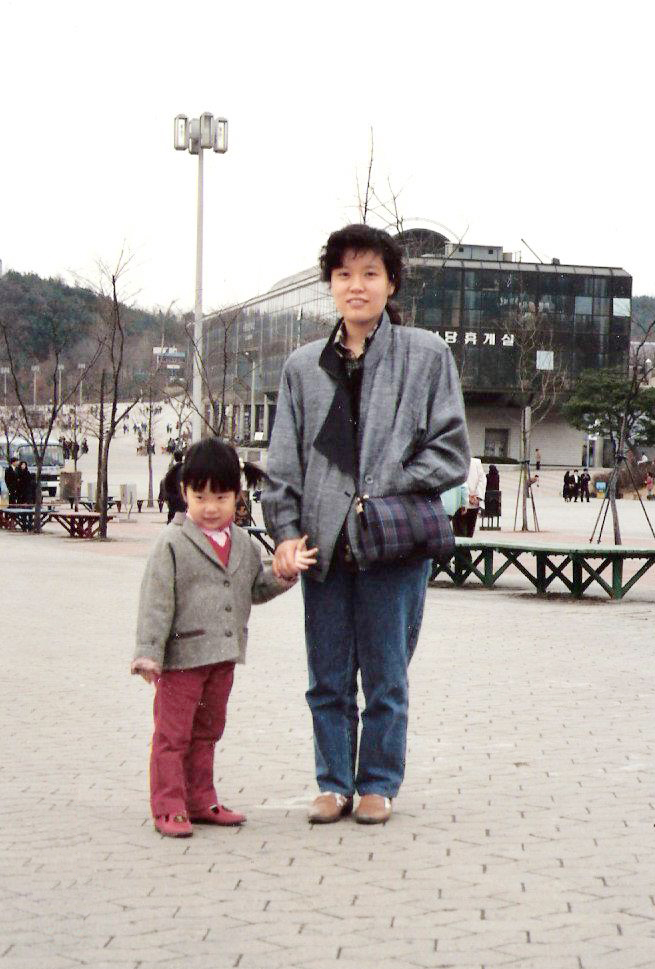 Now that I was about to begin my own working life, I had all kinds of questions and anxieties. I had been a student for so long that I could gauge the level of success I would have depending on the effort I put in. Working seemed different, with a lot more external and unpredictable variables. How will the intersections of my Korean Canadian womanhood impact this new chapter of my life? What if these markers of my identity make it harder for me? Isn’t it unfair?

As I was listing all my fears, I was afraid that my mother would dismiss my worries as some kind of a spoiled millennial lament. Instead, she simply offered the practical observation that change is never fast; she illustrated this by telling me the story of my own birth and my grandmother’s reaction to it—something I hadn’t heard before.

My father is a first-born son. This used to mean—and perhaps, for some, still means—something significant to Korean families, because he is the “head of the family” and carries the family name. My grandparents had three daughters in a row before my father was born. I am told his birth was a happy occasion. My mother, being the wife of this first-born son, supposedly had an important duty to produce a son.

After I was born, my grandmother came to visit my mother. She was in a very good mood, because a fortuneteller assured her that a boy would be born. She had a good feeling about it.

Except I wasn’t what the fortuneteller predicted.

When she found out my mother had given birth to a girl instead of a boy, my grandmother did her best—really her best, my mother recalls—not to look disappointed. But the disappointment was great, to a point where she didn’t even stay a full hour and left rather hurriedly. “I don’t even think she said congratulations,” my mother said, but she couldn’t remember after the hazy hours of pain and birth.

I thought back to the times I’d spent with my grandparents as a child: they spoiled me to death during visits, which always began with a trip to the corner store where I could pick any amount of candy I wanted.

Seven years later, my mother became pregnant again. Early in her pregnancy, my grandfather asked her if she had found out the sex of the baby. She had not. “You could have another one if it’s a girl,” he told her.

In the car ride back, she told my dad she would not have another baby just so they could have a boy.

My dad simply replied that he didn’t care about the sex about the baby, and that another baby was not necessary.

(But this time, my grandparents’ wishes came true—the fortuneteller was just 8 years late).

So you see, she told me: it took a generation, but our family got to a point where the sex of the baby didn’t matter so much anymore—they did not demand a woman carry another child for the sake of having a son. Maybe it’ll be similar in life, she said. In the workplace, people of my generation may experience something that is unfair and sexist. But the next generation will probably see something better, and work in better conditions. And isn’t that something?

My mother was always the practical one, occasionally to the point of slight pessimism. Growing up, I sometimes resented her bluntness about my own limits. But that day, in a foreign country that was new to both of us, hearing a piece of family history that was new to me, I saw her differently.

I always thought my mother quitting her job to raise me was a defeat—a typical defeat that was (and is) endemic because of societal pressure. After the conversations with my mother, however, I realized it was a choice she made because she wanted something else for me—something different, maybe just a little bit better so I could take it a little bit further than she did. For the first time, I really understood why my parents made the decision to leave their comfortable life in Korea for the great unknown that was Canada: they were driven by the hope that they could create a future that was a little bit better. Could I do the same in my life?

“Maybe we can eat some paella tonight?” My mother asked me as she finished her story. We were in Spain, after all.

Rosel Kim grew up in Seoul, South Korea, before immigrating to Vancouver with her parents at the age of eleven. Her writing has appeared in Vancouver Magazine, Vancouver Observer, Montreal Review of Books, among others. She occasionally blogs at thebuttercleanse.tumblr.com, and tweets at @jroselkim. She lives in Toronto. DO WHAT FEELS RIGHT