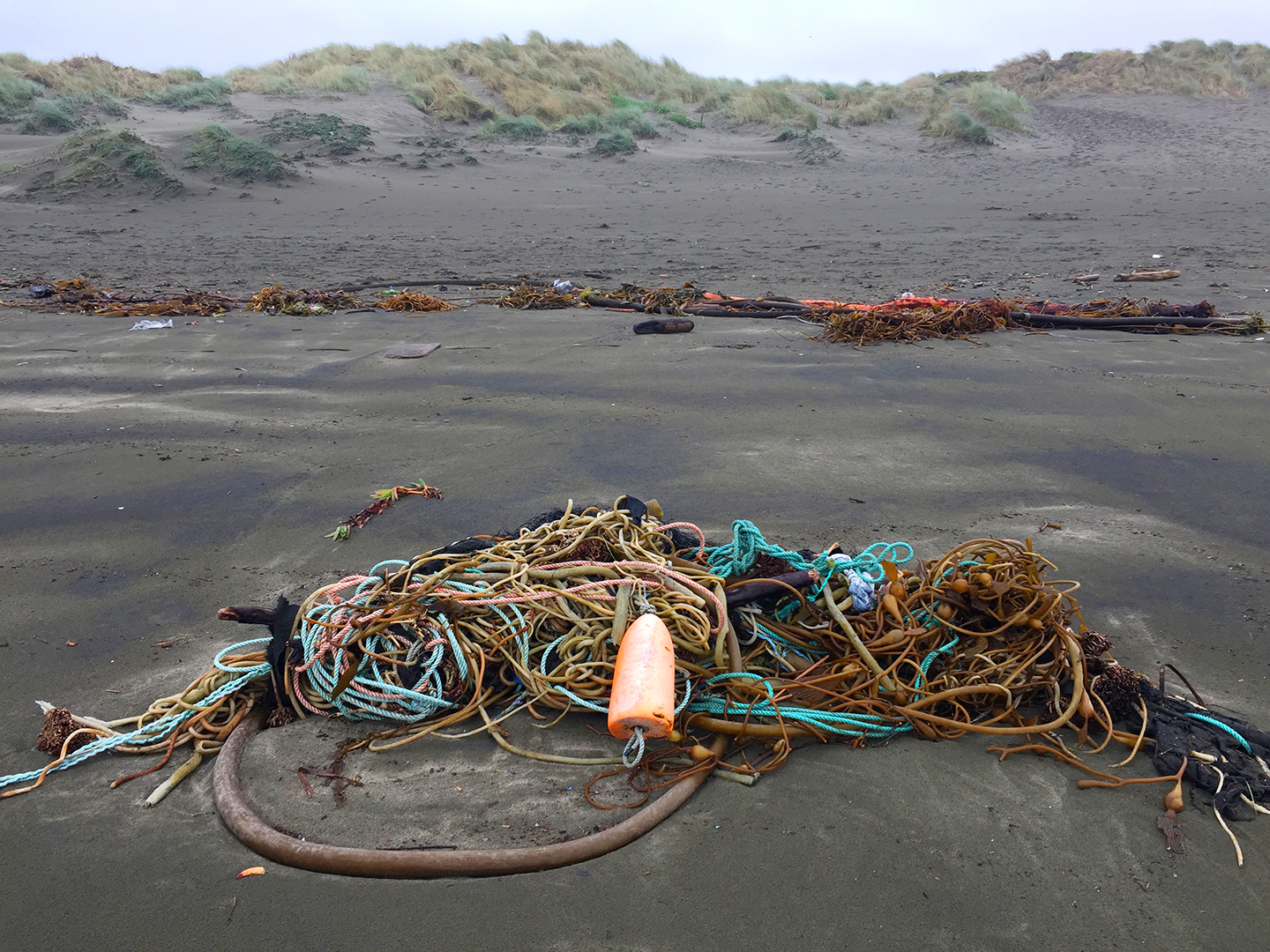 As oceans and beaches fill up with plastic, and marine debris garners increasingly regular media attention, companies commodifying reclaimed marine waste are popping up like dolphins in a surf lineup. Because of legislation like the plastic bag bans in places such as California, Delhi, and Kenya, massive amounts of marine debris will be eliminated, and businesses are leaping now to make a buck collecting ocean-polluting plastics and turning them into sellable consumer goods. Preventing an increase of pollution in the world’s oceans is hardly a bad idea, but the gesture of reappropriating “ocean plastic”—named as if it comes directly from the ocean itself without undergoing a violent process of extraction—is more one of saving (or making) corporate face than of saving any ecosystem, let alone the planet.

If conscious capitalism, which asks individuals to purchase “eco-friendly” commodities, is green capitalism, then this green-washing pulled from the ocean is blue capitalism: adjacent on the political-economic spectrum to what Stephan Helmreich in Alien Ocean terms “blue-green capitalism,” in reference to marine nanotechnology. What I’m calling blue capitalism would be the aquatic parallel to land-based green capitalism, which continues the violence of extractive economies. Blue capitalism produces commodities within the same infrastructure of contemporary consumerism that has gotten us into this mess: the one in which the oceans (and us humans) now need saving. Blue capitalism won’t prevent climate catastrophe and the whole host of ecological and social problems that go along with it, including ocean acidification, overfishing, and pollution—all of which affect people far from the coasts as well.

The products of blue capitalism take many forms; a few of the most salient are Adidas’s ocean plastic shoes, the L.A. startup Bureo’s skateboards made from fishing nets extracted from the coast of Chile, and sunglasses made from marine debris, produced by Bureo and Norton Point (a Martha’s Vineyard company). On the homepage for its recovered-marine-debris shoes made in conjunction with Parley, Adidas says, “We are working with Parley to transform ocean plastic pollution into high performance sportswear, spinning the problem into a solution.” In their very marketing text, Adidas admits that this sportswear is no more than a trick of advertising: spin. Simultaneously, the company refuses to disclose the full material make-up of the shoes. While the marketing copy for, for instance, the Terrex Climacool Parley Boat Shoes focuses on the “Knit upper made with Parley Ocean Plastic™,” “Webbing heel loop made with Parley Ocean Plastic™”, and the fact that “Some of the yarn features Parley Ocean Plastic,™” one might also suppose that these shoes include additional materials. And, judging by the fact that the components of the soles and laces aren’t listed, they would not be wrong.

This blue capitalist agenda of branding and image leads consumers to feel like they are saving the planet when they purchase a product, while compounding the capital accumulation, both cultural and economic, of the company

At the time of the writing of this article, Bureo has recycled 176,520 square feet of fishing net from the coast of Chile. If the nets collected average 200 yards long, this amounts to only approximately 294 nets—a drop in the bucket, considering the number of commercial fisherpeople around the world with nets in the oceans. Bureo’s marketing copy rewrites profit from pollution as prevention of pollution. What the company is really doing is reclaiming the waste in a kind of upscale recycling. Norton Point similarly claims to be “cleaning our oceans by recovering ocean plastic and turning it into high-end sunglasses.” But picking up garbage after it’s entered the waste stream isn’t prevention, and collecting a few kilos of marine debris here and there is not cleaning the oceans.

While these three companies—and others like them—are reducing the amount of pollution circulating in the world’s oceans, the ecological benefits are negligible at best and misinformative at worst. The reductions of marine debris are minor: over five trillion plastic pieces weighing more than 250,000 tons are afloat at sea; the vast majority of these (92%) are microplastics, while only the remaining 8 percent are macroplastics.

Microplastics are pieces of plastic less than five millimeters long and often invisible to the naked eye; macroplastics are pieces of plastic larger than five millimeters and include most of the common plastic marine debris people pick up: ropes, buoys, shipping trays, shoes, plastic bottles, and so on. Cleaning up macroplastics, although it looks good, does not address the greater challenge posed by microplastics. Not all plastics float, and vast quantities of plastics sink to the seafloor, out of the reach of cleanup efforts: indeed, Lucy C. Woodall, et. al report that “the deep sea is a major sink for microplastic debris.”

Blue capitalism’s advancements are not measured in reduced quantities of marine plastics, but rather in the increased cache of the companies that sell these repurposed articles of petroleum back to us in the form of innovative commodities. The life of the fishing line may have ended when it turned into a ghost net (a net abandoned or lost at sea capable of entangling animals), but the petroleum lives on—and creates profit again—in the form of shoes, sunglasses, or a skateboard, now imbued with the cultural capital of the “eco-friendly,” and the brands reap the benefits.

This blue capitalist agenda of branding and image leads consumers to feel like they are saving the planet when they purchase a product—or at least to be able to imagine for a moment what it feels like to save the planet—while compounding the capital accumulation, both cultural and economic, of the company.

“Harvesting” marine debris from places such as Chile and Haiti perpetuates relationships of colonization, extraction, and domination that we are so accustomed to seeing under capitalism. Both Bureo’s and Norton Point’s websites are full of white faces. They give no indication of the people who are doing the hard labour that keeps alive these two businesses run by white men. Like so much of the environmental movement, their sustainability campaigns prioritize white lives over non-white lives, both in labor and in representation.

On its website, Bureo says, “Our recycling program in Chile provides fishing net collection points that enable responsible disposal. Financial support is provided to local labor and participating communities, who are incentivized to keep plastic fishing nets out of our oceans.” The very (passive) syntax obscures who is actually doing the labour here and what labour, exactly, they are performing. It refuses to acknowledge that the “local labor” is fisherpeople in Chile who are most likely brown and/or indigenous. It doesn’t explain what happens to the fishing nets after they are dropped off. Are they sent to a local recycling centre and cleaned, melted down, and poured into the molds for their next iterations there? Are they shipped directly to the United States for production? Are they shipped elsewhere for production?

The opacity of this supply chain including setting up “collection points” and “incentivizing local labor” recreates the very processes of colonization that have gotten us into the current web of ecological catastrophes: white people coming in from elsewhere to tell people what jobs to do and how to do them. What would Bureo look like if its founders harvested the marine debris to make their sunglasses themselves within their own communities rather than relying on “local labor” in a nation with lower wages for profit?

On the consumer end, Bureo sunglasses cost US $139 per pair and skateboards start at US $149 each. At Norton Point, sunglasses made “from recovered HDPE in Haiti” range from US $129 to $139. These are not particularly affordable products, and their costs point to another way in which blue capitalism is not adequate to the crises, both socio-economic and climate-related, attendant to late capitalism: this particular economic structure does not diminish economic inequality but rather exacerbates it. While Norton Point’s founders pat themselves on the back for paying “local collectors… a living wage” in Haiti, they are being doubly exploitative: of the labourers who have minimal control over their labour, and of consumers dropping over a hundred bucks a pop on sunglasses still designed to eventually end up in the landfill.

Recycled marine debris products are not going to prevent climate catastrophe. Recycled plastic products aren’t going to clean up the ocean, or prevent ocean acidification driven by fossil fuel products. From their new position in the commodity chain, they will continue to pollute, releasing particles into the environment. What’s more, these shoes, skateboards, and sunglasses are still designed to break, just like their non-recycled counterparts. The fact that they’re made out of plastics recovered from the ocean doesn’t actually prevent plastics from re-entering the waste stream, it simply reroutes their itinerary to the landfill (or incinerator, depending on local waste technology). It’s not enough, in the words of Adidas Parley, to “pay tribute to the ocean.” It’s not enough to develop ocean plastic sunglasses.

In fact, it’s not enough to make sunglasses and utensils out of renewable products like bamboo. Consumption as a cultural norm is devastation embodied. Divestment from fossil fuels, including those used to make the plastic that produces the massive amounts of waste in the oceans, is just the beginning of what is needed to begin imagining a preserved planet. Economic change (such as transitioning to the community economies advocated for by, for instance, the geographers J.K. Gibson-Graham), policy change including regulations on resource extraction and pollution, and cultural change at all levels (including popular art that debunks myths around consumerism) are also crucial in creating the worlds necessary for all of us to survive and thrive. If humans rely on stories to create and maintain our societies and the goods they produce, we need to start telling stories that respect the sources, labourers, users, and end points—so often the oceans—of those goods.

Maya Weeks is a writer, artist, and geographer from rural California working on marine debris as capital accumulation, climate change, gender, and logistics. Catch Maya on a surfboard or a sailboat or on Twitter at @looseuterus *All images in this piece are by Maya Weeks 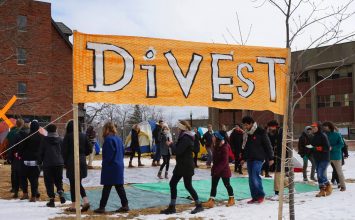 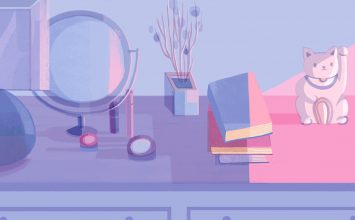 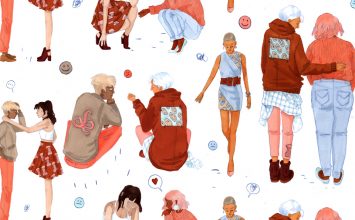