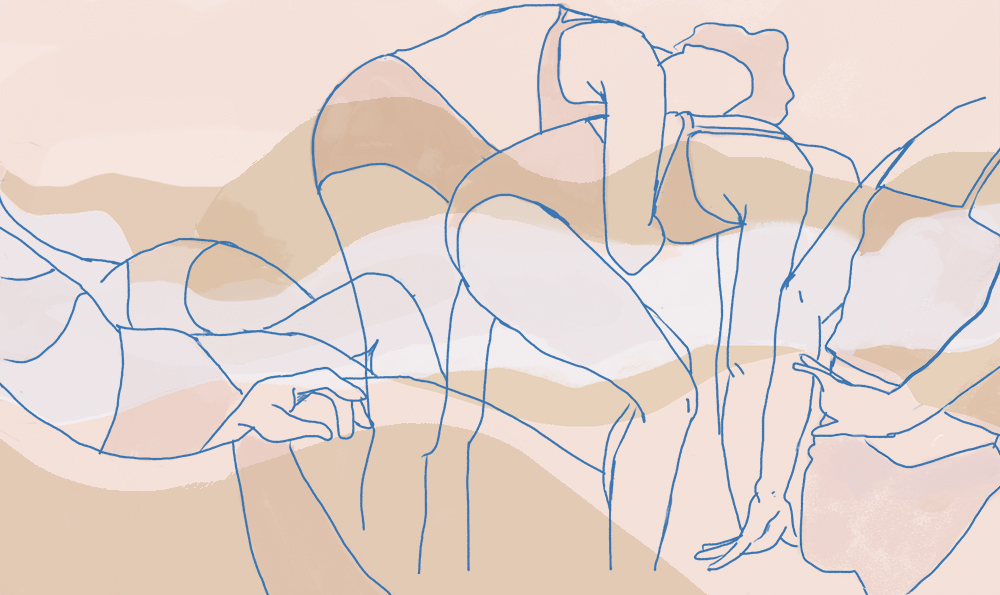 Posted by GUTS on January 28, 2020 Comments Off on Editorial Note: Movement

GUTS started in Edmonton in 2013. The idea for a feminist magazine began during a small reading group, inspired by dialogue with seminal and emerging feminist theory and writing. The first issue launched on a homemade website and featured content created by unpaid artists and writers—many of them friends and mentors. Sustaining the magazine took work and learning, and through that process it expanded and changed as a project. GUTS has been shaped by different visions, criticism, conversations, and social movements. It has given new writers and artists a place to publish their early work, and well-established essayists a place to try new things. Those writers, artists, and our readers have transformed us, the editors, and our thinking. And GUTS has taken on a life of its own in the process.

The magazine has always been volunteer-run, but for the past five years grant funding, along with monthly donations from our readers, has allowed us to cover certain operating costs and offer contributors honorariums. Now that our primary source of funding has come to an end, our already precarious financial situation has become unviable and we will be signing off with this final issue.

The granting program we relied on provided a small amount of money, supported the work of so many people, and created a resource for thousands of readers. In our minds, these cuts are clearly more disciplinary than they are economical.

We see a clear link between the ongoing government-implemented austerity measures in Ontario and the effective silencing of critical publications, but we would also be remiss to ignore the other factors prompting our hiatus. This project has always been a labour of love, relying on unpaid and underpaid labour due to a chronic lack of resources. Through it all, we’ve been energized by the work, but it has also been challenging at times to balance the unpaid hours with jobs, life changes, health challenges, saturn returns, and new beginnings. Perhaps this is what is so frustrating about the funding cuts to granting programs like the Ontario Arts Council; the granting program we relied on provided a small amount of money, supported the work of so many people, and created a resource for thousands of readers. In our minds, these cuts are clearly more disciplinary than they are economical.

Needless to say, the work we started with this project is incomplete, and it will continue in different forms. GUTS has served as a platform for a community of artists and writers who are also publishing books of poetry, collections of essays, viral twitter threads, and graphic novels. We are proud of what’s been accomplished over the years with the ongoing support of our dedicated readers. While we are heartbroken to let GUTS go, we are so grateful for what it has become. We couldn’t have done it without you. We can’t wait to see what you all do next.

We chose the topic of movement for this issue because we wanted to hear about both constraint and transformation.  Movement is too often reduced to individualized efforts to overcome certain obstacles. With this final issue, we want to explore how to make that movement collective and strategic without demanding that some people stay quiet or be left behind.

Our contributors embrace movement as it holds possibilities for healing and surviving, even in worlds founded on forced movement, on slavery, on land occupation. Within and despite these legacies of violence and trauma, the writers in this issue find ways to fly, dance, and skate.

Thinking about the Middle Passage and slave ships through Black mythistory, contributor Almah LaVon Rice recovers instructions for flight: “Our sacred stories say that Black people can fly—float—away from Black bondage, Black death. Fly away home.” LaVon Rice insists, alongside Toni Morrison and Kendrick Lamar, that the stories of Black life are always more complicated than the one-dimensional tale of suffering.

Likewise, citing Black singer and storyteller Diana Ross, Charles Theonia asks after joy in their poem “THE COLOR OF JOY IS PINK” featured in this issue. They write, “all along the self keeps atomizing and joy / is a shared term I don’t know the name for.”

While LaVon Rice reminds us that “there are limits to transcendence,” this issue explores how we heal and develop skills for resilience. Traumatic response, argues contributor syma habib, is part of life, and collective movement as an intentional process of coping with these trauma responses can be healing: “We heal when we are dancing in a crowd, playing sports, pushing air through our lungs as we sing or chant together or doing yoga with a community.”

This issue is an attempt to locate and articulate ways of moving together against all the constraints placed on us by colonialism, by cissexism, by ableism. The artists and writers featured here move towards healing and towards relationships, in the face of gentrification, forced migration, trauma, and colonial geographies.

Contributor Faith Paré considers how bodies are often marked either for death or survival in an essay on her obsession with slasher films. Paré pays close attention to the trope of the Final Girl—the perfect, plain victim and the only girl who emerges unscathed. Despite the Final Girl’s marked whiteness, Paré finds a sort of kinship with her and asserts Black and brown women deserve to have their survival and horrors witnessed. In “Sk8 or Die,” contributor Trynne Delaney proposes “careful recklessness” as a way to move cautiously (like so many queer and racialized people must) and with intentional abandon. She writes, “My body exists as it is and deserves to hurt and to heal as much as any white-cis-het-fuckboi in his prime.”

Public spaces, like the skate park, often reveal themselves to be exclusionary, enabling the free and uninhibited movement of white cis people, and restricting everyone else’s movement. For example, Melissa Haughton’s recount of an impromptu summer road trip exposes how the freedom of the “open road” is a privilege, limited to those who do not have to contend with racial profiling or targeted police violence

Responding to calls to work past pain, exhaustion, and sensory overload, Leah Lakshmi Piepzna-Samarasinha describes how they learned to make a writing life in a disabled way. Through their own experiences and alongside advice from disabled elders, Piepzna-Samarasinha describes ways of working, moving (or not moving), and traveling outside of those presented by abled norms. As they write, “if there’s one thing disabled people are good at, it’s saying there is no one way it has to be. We are so good at imagining completely other ways of living, working, not working, having relationships.”

Security and mobility is too often predicated on the displacement, exclusion, and assimilation of “others.” In this context, creating and preserving spaces for thriving is a key tool of survival for many. In an essay that prides immigrant-run general stores in North York and Parkdale as spaces of solidarity, resistance, and community building, Hadiyyah Kuma argues that resisting pressures to assimilate and be displaced by the forces of gentrification can be beneficial to outsiders’, including newcomers’, well-being.

Forging a sense of security in the face of threats and acts of displacement can sometimes mean developing a sense of home that is not permanent or singular but founded on relations. As Céline Chuang writes in her essay on grieving gentrification in Vancouver’s Chinatown and Downtown Eastside, “my definition of home is one that, like me, is always on the move: it lives not in a geographical place, but in scents and tastes and mannerisms and moments, continually stitched together.” Exploring the possibilities of building collective resistance to gentrification on stolen land, Chuang asserts that the struggle must be both anti-racist and anti-colonial, centred around Indigenous leadership. Countering the violent and divisive forces of settler colonialism, Chuang suggests, demands a sort of “force through fluidity,” that works to restore the relationality and memory that has been strategically erased through ongoing displacement and dispossession.

In their poem “Urban NDNs in the DTES,” jaye simpson captures the fiction of democracy, justice, and healing in a settler colonial state. Located in Vancouver’s Downtown Eastside, this poem makes clear the settler occupation of Indigenous territories is firmly a geographical project—as is the survival of Indigenous peoples. simpson writes, “wasn’t until i had rewilded unto the very streets / that i recognized that it kept her alive” presenting a geography of survival that holds settler colonialism—not the streets or the people there—responsible for acts of violence consistently committed by white settlers. The streets, in simpson’s geography, are indeed punctuated by violence, death, and mourning, but they are also a network that keeps people alive.

This issue is an attempt to locate and articulate ways of moving together against all the constraints placed on us by colonialism, by cissexism, by ableism. The artists and writers featured here move towards healing and towards relationships, in the face of gentrification, forced migration, trauma, and colonial geographies.

Moving is difficult. Moves we make to heal and resist, like dancing and skateboarding, can be awkward before we’re practiced in asking our bodies to take new shapes. Through a series of images, Meagan Berlin in collaboration with their sister Molly Berlin prompts us to consider the uneasiness of movement. Projected onto fish, artist and writer together reveal the wriggly, uncomfortable facts of mobility. Moving can also be generative while at the same time marked by loss. As Masooma Hussian writes in her essay on moving out of her parents’ home to build a new one with her girlfriend, “In order to make room for what’s to come, something must be let go.”

While this issue marks an ending, we also hope it makes space for new dialogues, collaborations, and movements. The work of imagining a different world is ongoing and now it is time to try new things, strengthen our alliances, and speak about alternatives. We look forward to continuing this work with you.

In love and solidarity,
Your GUTS editors 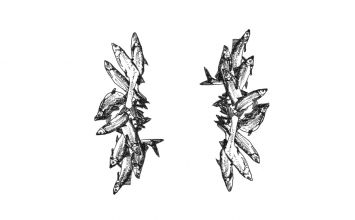 The Discomforts of Movement: a Visual Essay 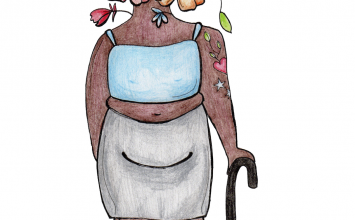 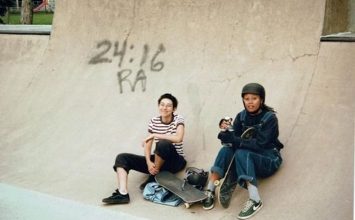