The beauty in the fact that both of their names started with the same letter did not escape them. Early on in their relationship they had taken to calling each other by that letter. At first they used it only between themselves, but eventually it became their shared name even in the company of others. The single name was never problematic in their two-person household because it was always clear in their dialogue who was addressing whom. If D called for D from one end of the house to the other, the rooms that separated their bodies replaced the need for separate names. The name also proved functional when discussing each other in shared company; it was obvious who was discussing whom by which one of them had spoken. These casual contextual and grammatical distinctions meant that the sentence structure they used in daily conversation was largely unaffected.

On the phone their disembodied voices had recognizable patterns of speech, if the caller knew them well enough to distinguish the two. A less familiar caller, unsure of who was at the end of the line, could circumvent the problem by asking that the information be passed on. Failing that, it was usually clear, based on the purpose of the call, who the information was intended for. Writing “D” on a package or a card was a common source of confusion. It was on these occasions that their friends were made aware of the fact that their last names also started with the same letter. Some birthday cards were left unaddressed by friends who deemed it too formal to use a family name; others were left technically addressed to both of them. Ultimately, this did not pose a problem, because they had not been born on the same day.

The way their partner’s eyes looked when they first opened in the morning or their inability to do so was used to gauge which of the two would get out of bed to make the coffee that day. There was a general rule established between them to take turns, one day on and one day off. However, this proved to be inadequate in accounting for normal fluctuations in mood caused by disturbed sleeping patterns, illness, emotional injuries, and so forth. If turns were missed, the list of owed turns was easily forgotten in the mental fog of the morning and the task went to the one who was less determined to stay asleep. The coffee situation was one of the few exceptions to the normal rules governing the division of household labour because it depended so much upon their shifting internal states. Tasks less vulnerable to fluctuating emotional dynamics were arranged as territorial claims on a mental floor plan of their dwelling.

Over the course of the relationship, when one of them became fully identified with a particular task, that task gradually ceased to exist for the other. This applied to chores such as watering plants, filling bird feeders, changing bed sheets, vacuuming rugs, and so forth. These behavioural patterns developed in response to various factors. Certain tasks were assigned unconsciously, while others had particular stories attached. For example, changing the cat’s litter was done by one D and not the other because of a history of childhood asthma, which they feared could be triggered in adulthood from over-exposure to allergens found in cat poo. Cleaning the bathroom porcelains was an assignment that was established imperceptibly. It was presumed to be favoured by one of them on the hierarchy of cleanliness by the other, who might notice its dirtiness but not bother to clean it. Over time, through a complex process of dividing labour, each area on the mental map of their house had been marked with the letter D, drawing out the boundaries of their so-called domains. This mapping out of space facilitated the efficiency of living as a couple and was illegible to anyone but them.

Using this map gradually shifted their spatial perception into two versions of a single floor plan. Certain parts of the house and certain things contained within it escaped each of their realities. Examples of these blind spots included the kitchen floor (which was always clean), the miraculous replenishment of certain paper and cleaning products, and the emptying of garbage cans. These objects and surfaces did not exist on the same plane of reality of both partners simultaneously. A crumb on the floor, the waning stock of toilet paper, or an overflowing garbage bin was imperceptible to the one who didn’t tend to its condition. It was as if the house was made up of two coexisting floor plans that overlapped at certain points to form the complete thing. The danger in this divided system was of overlooking the balance of the two sections.

For the most part, their domestic agreements were successfully maintained through a series of non-verbal negotiations. Body language, meaningful stares, and silences were used as modes of communicating their desires and expectations. What substance passed between them as currency during these subtle interactions and how this currency was measured was impossible to know from outside of their relationship. Each exchange was a fragment of the much larger orchestration of the ever-shifting boundaries between them.

When a flaw in the system came to the surface—for example, when one of them felt a nagging resentment about how many times they had performed a particularly unpleasant task that the other had never performed in all their time as a couple—they might discuss how this task had become the domain of one and not the other. If they realized that they had fallen into an unbalanced pattern of behaviour, it was sometimes easier to focus on the larger, combined picture rather than on their individual needs. If a rearrangement of their domestic territories was required, it was in these conversations that they realized the complexity of the calculation they faced. It was not as simple as tallying up the tasks that they performed daily, weekly, or monthly. Each household chore was attached to multiple others, like a tangle of wires.

During these discussions, they did their best not to offend their ethical sensibilities and trusted each other to not have offensive ethics. They understood that the way they managed their domestic life was motivated by their shared values and that these common desires were challenged by complex psychological patterns and internalized social training. They had originally come up with the plan to divide the work according to the physical space they lived in because they were aware of how much immeasurable labour their bodies performed on an ongoing basis. The house provided a concrete form on which to base their calculations, but with the constant rearrangement of its boundaries, the house proved to be more flexible than they had originally anticipated.

One day they watched video footage of a child’s birthday party they had attended a few weeks prior. Their friend had recorded a scene of them gathering platters of food in the kitchen and carrying them out into the dining room. They had never seen themselves captured on film before, and it brought on a surprising realization—there was a new grammatical glitch in the way they spoke. They had inadvertently begun using their shared name in reference to themselves in the third person. Rewinding the video and watching it a second time, they tried to view themselves as objectively as possible, as characters in a movie rather than in the context of their own lives. From this perspective, the identity of D was unclear and grammatically confounding.

When one of them said, “D’s got the peas and the gravy,” the viewer’s eyes searched across the screen to find whose hands were holding those dishes in order to identify the character. A few minutes later when someone asked D to pass the broom, two people grabbed the handle. The child’s birthday card was signed twice, “Love, D.”

On the screen they saw two characters called D, who used the name interchangeably to refer to themselves in the third person, to each other, and occasionally in reference to themselves as a couple, or a single entity. The logic specific to the use of the name appeared to exist exclusively within this group of people who knew each other personally. The only way for an outsider to know who was being referred to was by examining each statement in context of the story’s action. As a video, the scene was amusing to watch for its absurdity. In reality, the slippage between the identities of D, though somewhat endearing, made them feel uneasy.

They decided to practice the way they used their names. At first they used the unabbreviated versions self-consciously. Their names altered the way that they thought and felt towards each other, shifting the balance of their identities. As statements formed in their mouths, they often caught themselves slipping into comfortable habits. Their full names lacked a certain intimacy, emphasizing the distance between them. The difference this created expressed unfamiliar possessive qualities. They wanted to master the way they spoke, to use names consciously and with flexibility, so that they could shape the boundaries between them according to the situations in which they found themselves.

They became self-conscious, like two meteorologists assessing their own forecast, announcing the current conditions, and narrating the constantly shifting weather patterns of their relationship. Like cohabitating weather systems, they experienced the fluctuating boundaries between them as changes in the atmospheric pressure contained within the rooms of their house. Shifting temperatures exerted pressure on the walls containing them, and rearranged the floor plan as pressure built up or lifted and as air stagnated or flowed. The volume of the flexible rooms adjusted to the other spaces in the house and to their emotional contents concordantly. Only they could see these internal movements and feel the effects of the shifts in scale that tempered the swelling of their emotions and framed the scenarios inside them. They moved through the house and the house moved with them in the constant flux of the average coexistence.♦

A Comic for Surviving the Apocalypse 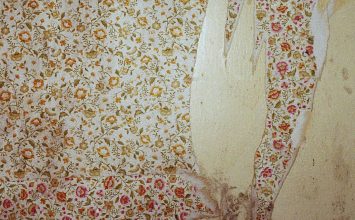