The archipelago of Svalbard sits at the northern terminus of the transatlantic ocean current known as the Gulf Stream. The patch of islands is often represented as being at “the top of the world”, though it could just as easily be thought of as at the bottom of the world or to one side of something on the world; the global north’s grip is thick.

The Gulf Stream travels from the coast off of Florida; after transforming into the North Atlantic Drift in a web of currents carrying warm water and whatever happens to be in it. Its path ends north of Europe. 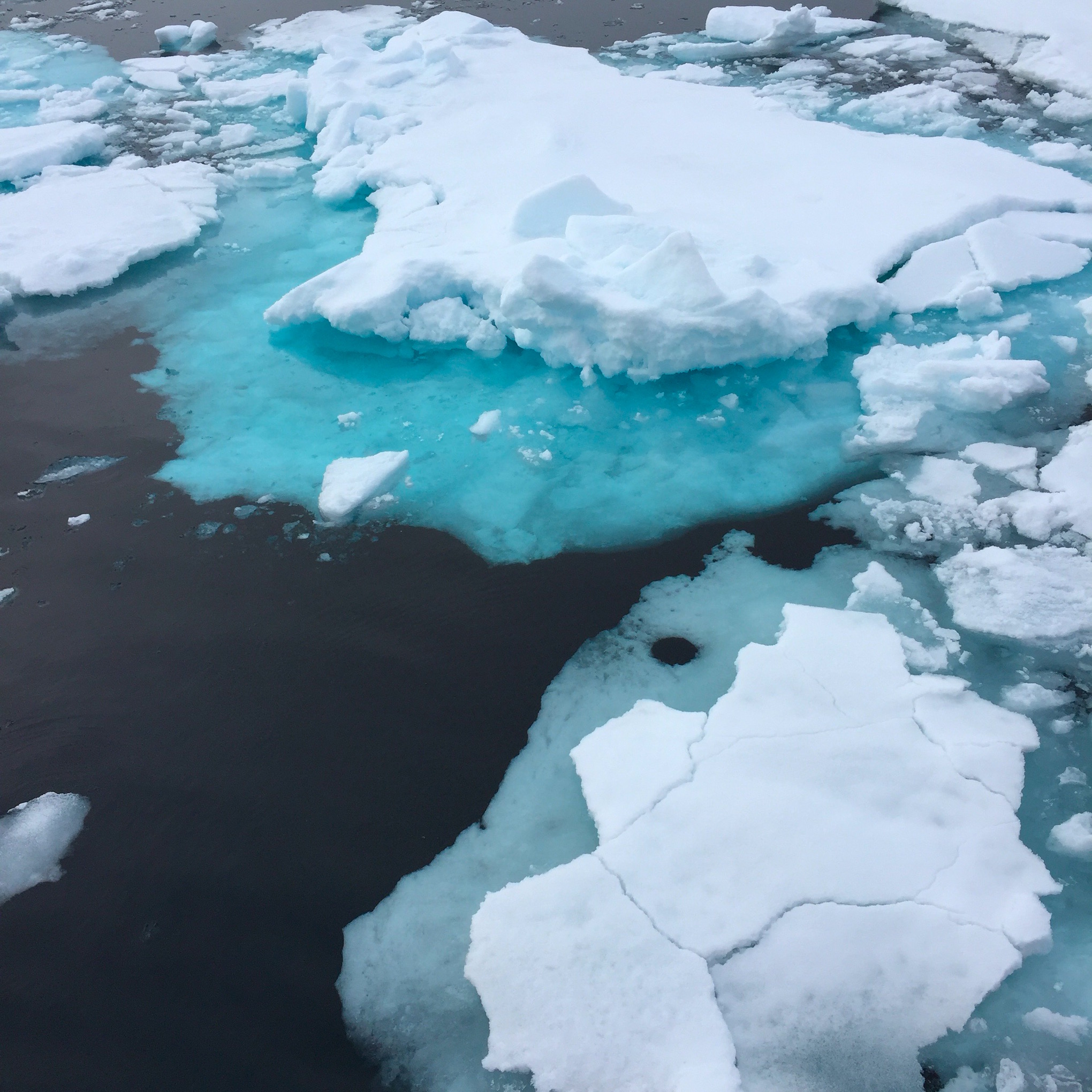 A hole in pack ice

Sometimes this includes waste from humans. Often it does.

Sometimes, when you are some twelve hours’ sail north of the northernmost reaches of the North Atlantic Drift, at the edge of the Arctic pack ice (a mass of ice that is not bound to land) that reaches all the way to the North Pole, you see a hole in the ice and wonder if holes in this ice are completely normal things or if some new pattern is emerging as the globe warms and the ocean warms and the Gulf Stream certainly warms and Arctic patterns move, for the time being, south and east. And when I say “you” I mean “me” but I also mean “we” and “us,” having been in the soup with all my fellow sailors, at sea on a barquentine tall ship for an artist residency where we were all working independently and also often together. 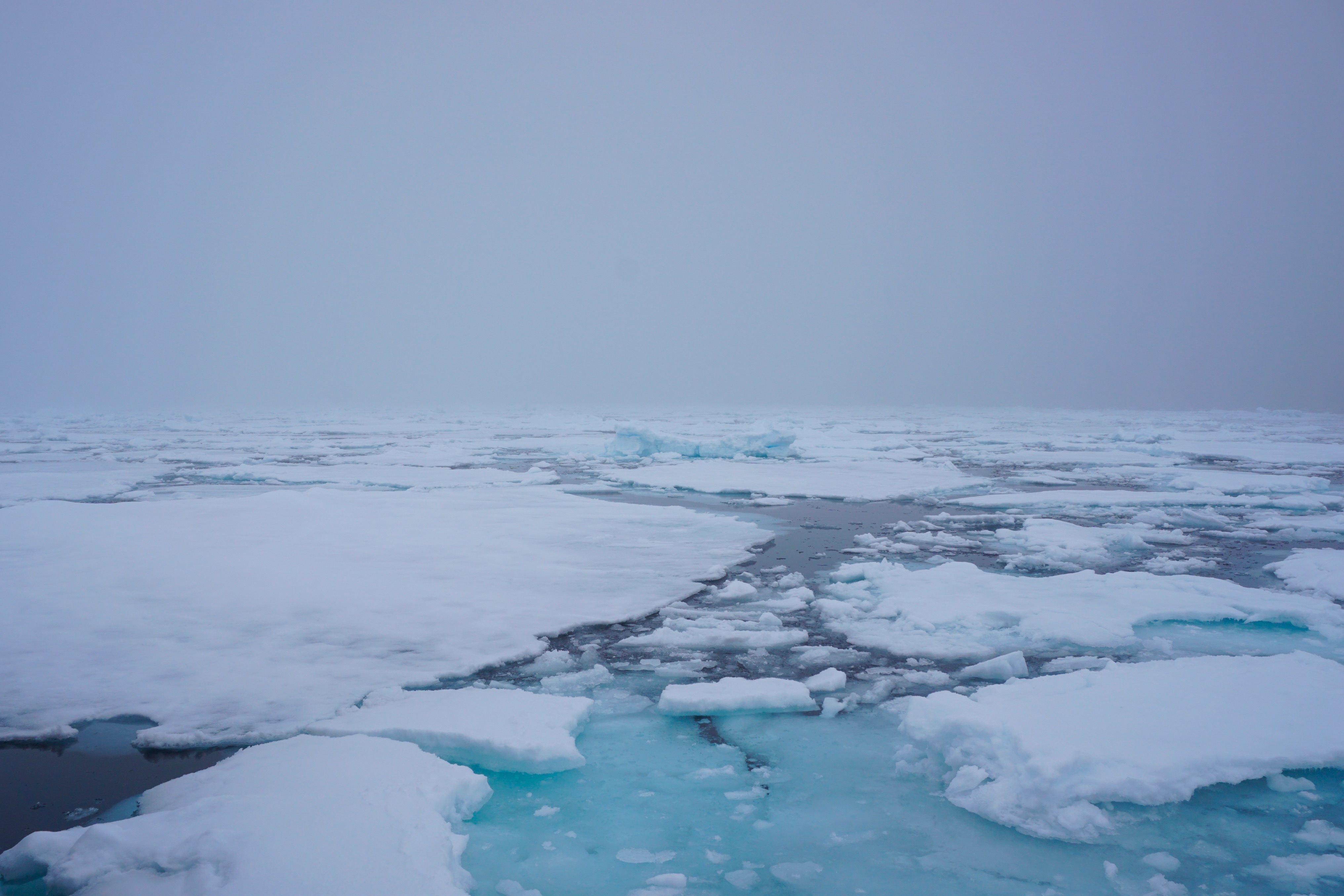 An iceberg on Arctic pack ice

Let us float backwards through the North Atlantic Drift and the Gulf Stream and the North Pacific Gyre and the Sargasso Sea. Let us float to Florida, and then let us set sail. 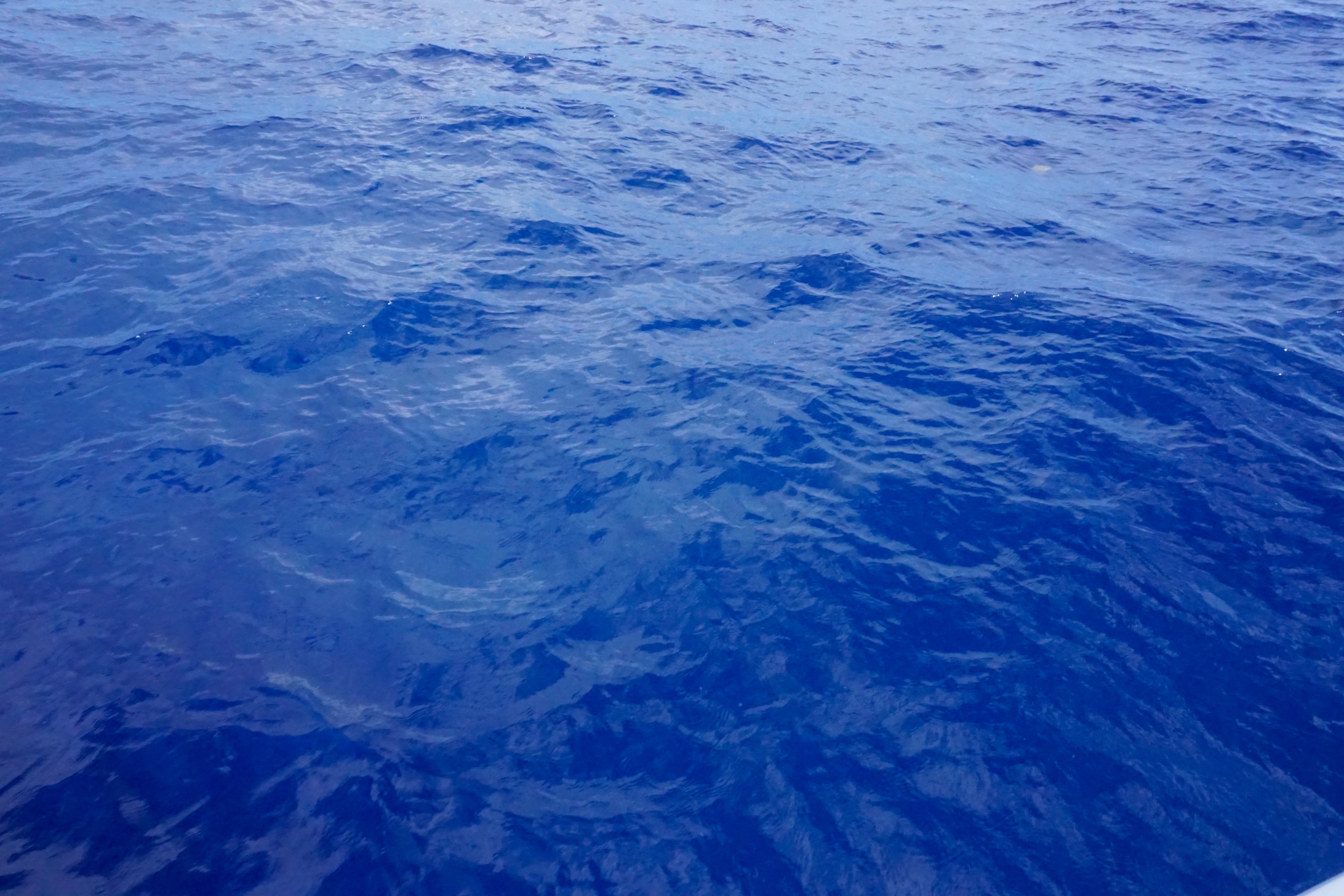 We are sailing through the Sargasso Sea, an ocean gyre enclosed by four currents. I, with my gender of mermaid, always, according to Elspeth Probyn, fundamentally queer, have come here studying trash; I have come to see how amounts of marine pollution visible to the naked eye compare to amounts of marine pollution the research has shown dwells here. I am sailing through. We are sailing slowly. Wind is low.

Storm’s up. June, hurricane season. I have been told that usually the hurricanes don’t come until later in the season, but the seasons have been changing. Every squall: will it be a big one? Will lightning strike our mast? Will we have time to stash our electronics in the oven? If not, how will we navigate to Bermuda without our electronic charts or Automatic Information System? How will we communicate with the port of St. George without a VHF radio?

What I have not been told is what it will feel like when my gender is being examined at sea. I went to sea to study marine debris as gendered violence and I ended up violated for my gender. It should not have been a surprise, but it still hurt.

Drops fall in the dark. Walking quickly, purposefully—trying not to run on deck, especially when it’s slippery from precipitation—to the companionway, going to my box across from my bunk and digging out my rain jacket. Taking off my life jacket, putting my rain jacket on, putting my lifejacket back on. Back up on deck, helming when it’s my turn, trying to hang on to the metal wheel only by the parts covered in rubber, the squall passing, lightning staying far away. The wind drying my leggings. The stars out and the bioluminescent plankton too. Sitting on the bow keeping an eye out for ships. 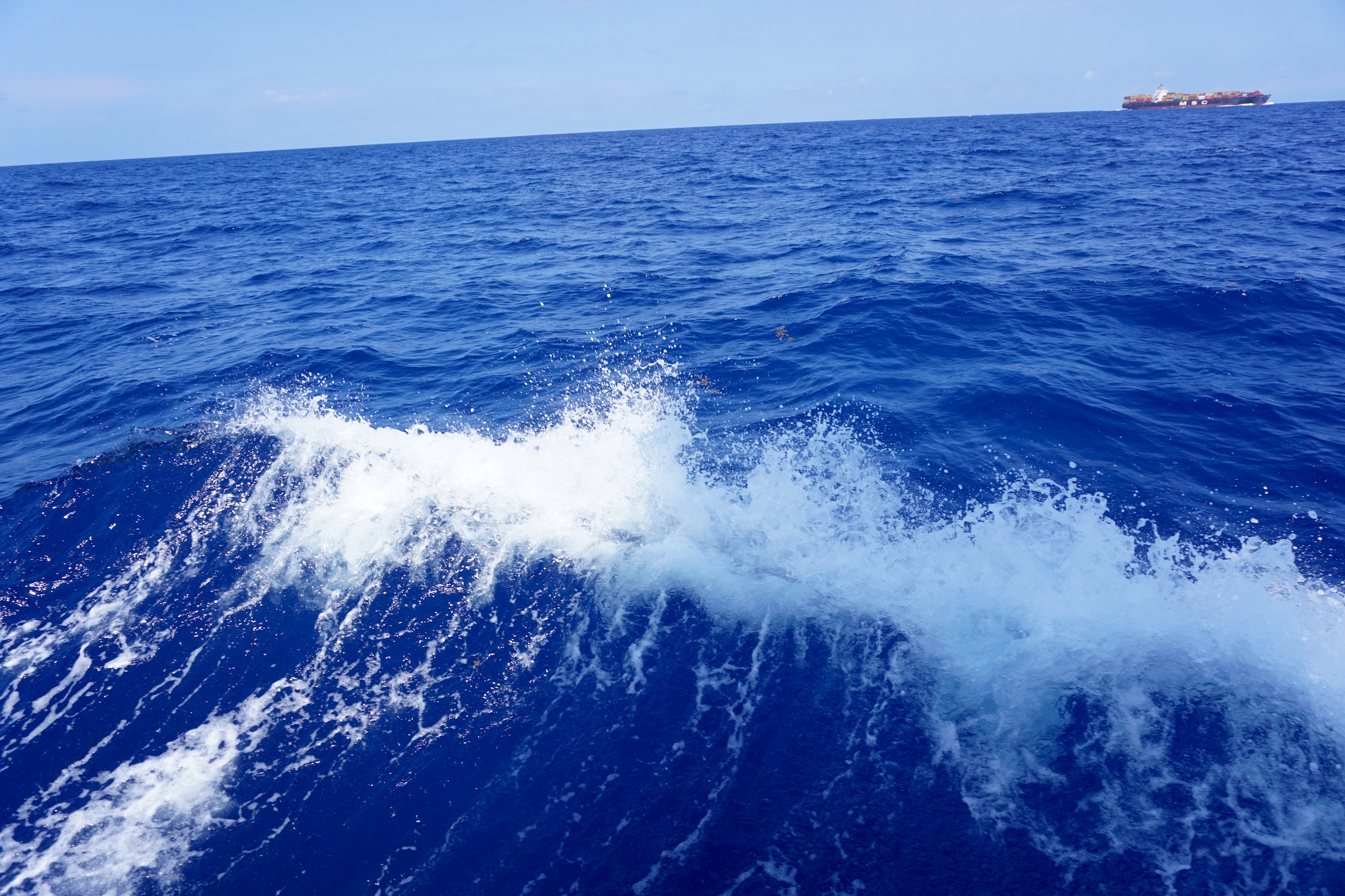 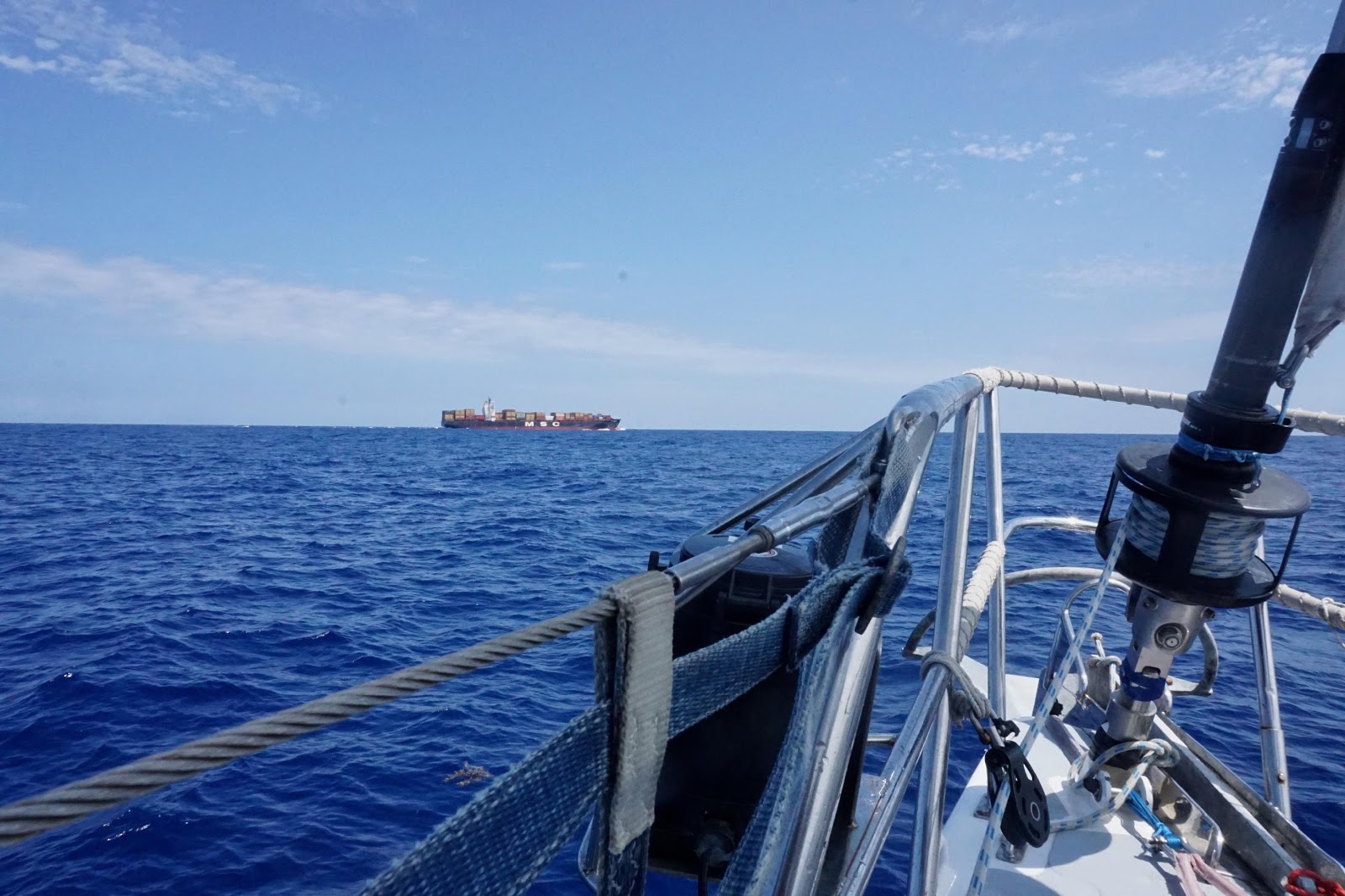 The industry was always transnational. Logistics were developed by the United States military as a way to speed up the way goods, specifically goods for war, could be transported across space, across national lines. At sea we are often crossing borders or we are in the space between borders, living there with the sargassum and the plankton and the dorado and the flying fish. And through everything, businesses stay open until they are shut. 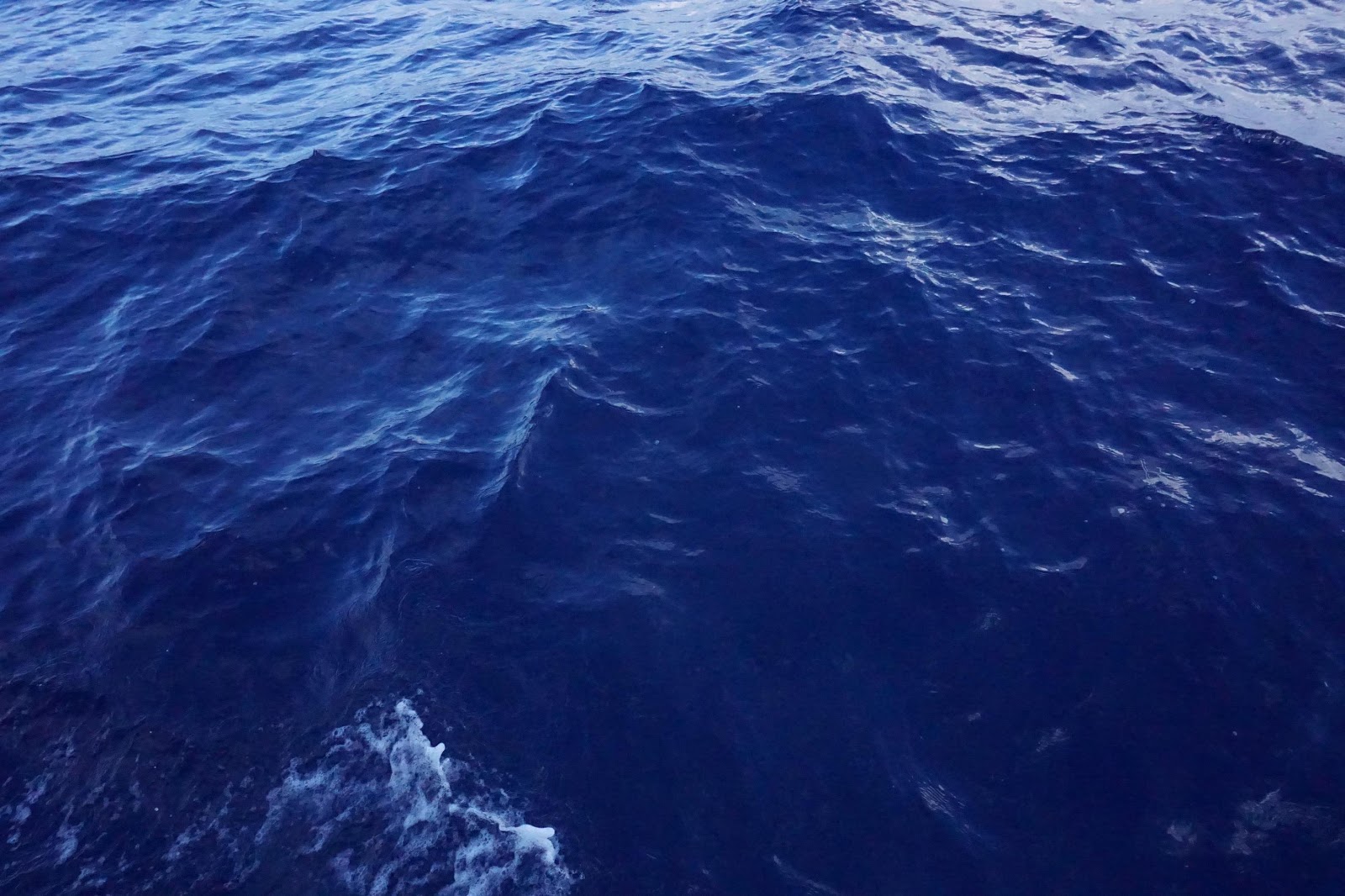 In the current sailing north off the coast of Florida, sailing toward and around the Bahamas, and sailing east to Bermuda, I see water bottles, a crate, styrofoam, unidentifiable bright-colored objects, unidentifiable white objects. I am relieved to not see as much trash as I had imagined seeing in the Gulf Stream. I am also alarmed, because study after study has documented how many thousands of tons (at least 250,000, according to Eriksen et al. in 2014) of plastic are in the ocean at large. 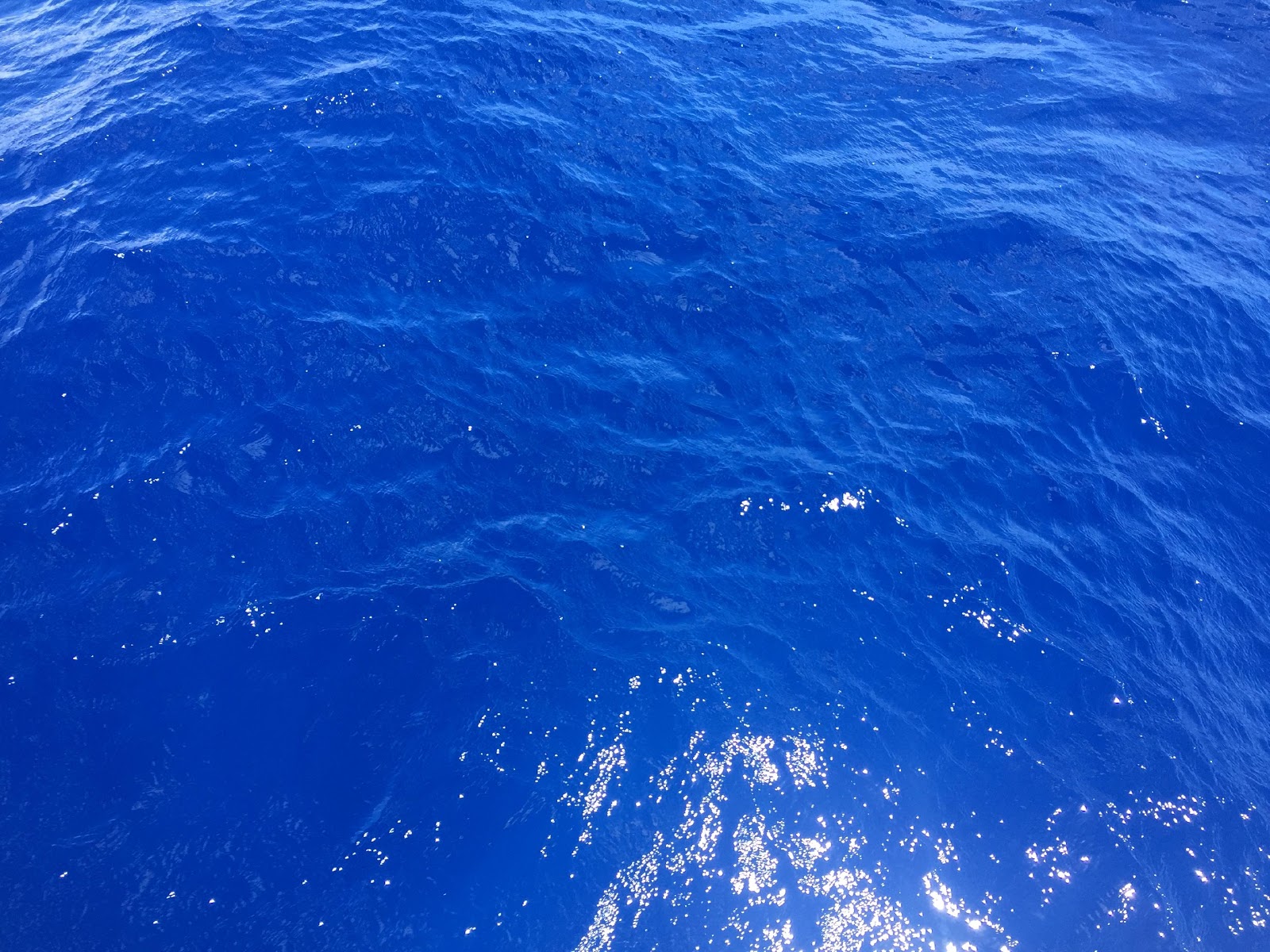 The Gulf Stream is the western boundary of the North Atlantic Gyre, which is host to its own eternally-shifting slowly-but-not-entirely-disintegrating agglomeration of mostly-plastic. Lead and other contaminants have also accumulated in the gyre. 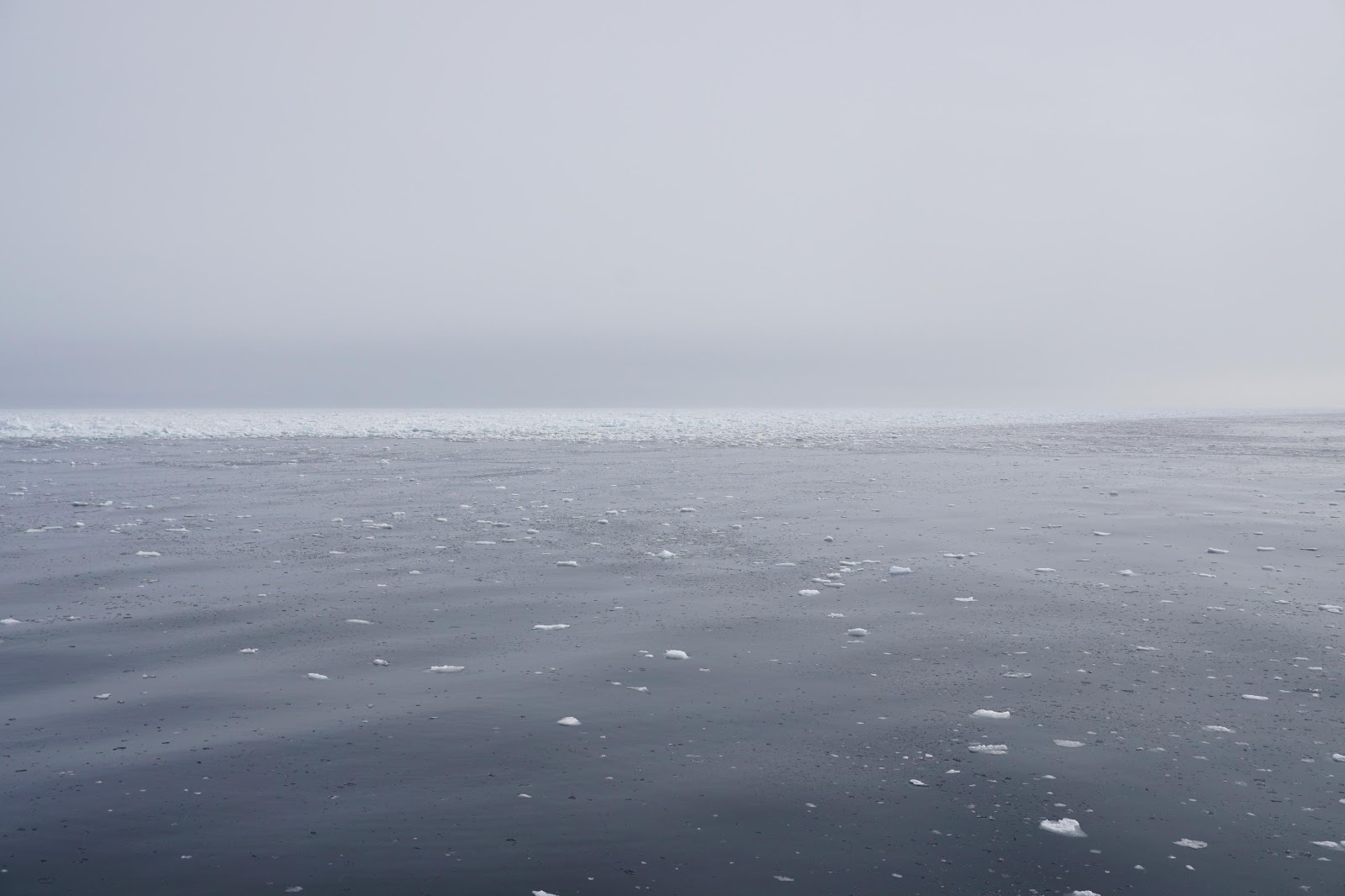 Very close to one of the poles, the air temperature is barely freezing. For a moment, light snow falls, and then it stops. Birds are out and about. I take a water sample for my project, analyzing plastic pollution in and around Svalbard, and my hands go numb after the ten seconds it takes me to accurately calculate the water temperature with my crude system (household thermometer in a baggie). The water is freezing, but only just. I continue to collect data. I am collecting data to write an essay. I am writing an essay to think through capitalism via trash. 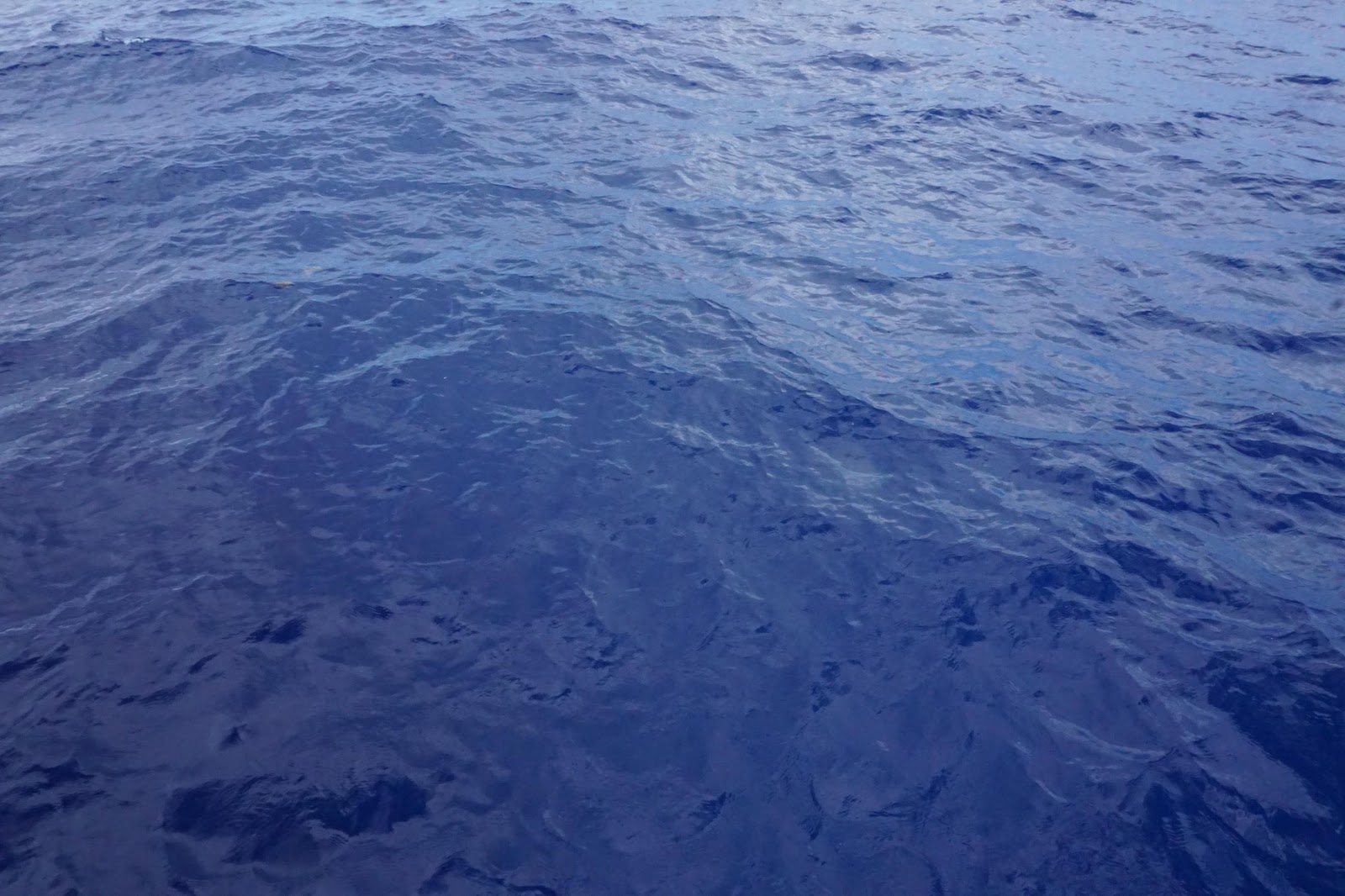 On the open sea as in sight of land we keep a log. The log of the ship documents speed, heading (direction of travel), whether or not the engine is on and how much fuel it’s using, visibility, weather, barometric pressure, whether or not there is water in the bilge, and more — pretty much everything except the temperature on deck and inside, which I am sure is usually around forty degrees celsius with no air conditioning, four fans, and limited refrigeration. These things stay off the record.

These things are remembered in our bodies, sweat lining the interiors of our ears, and in our clothes, like my outfit that I wore for the entire eight-day crossing that I now feel a mix of tender care and recognition when I look at it, and memories of, say, other people’s fans. Like the one I spotted at a thrift store—“This is just like G’s; they should have told us to bring one; he knew to because he’d sailed long and far before.” We see a lot of flying fish and not much other life.

There is, one day, a whale—a brief spout and then gone. 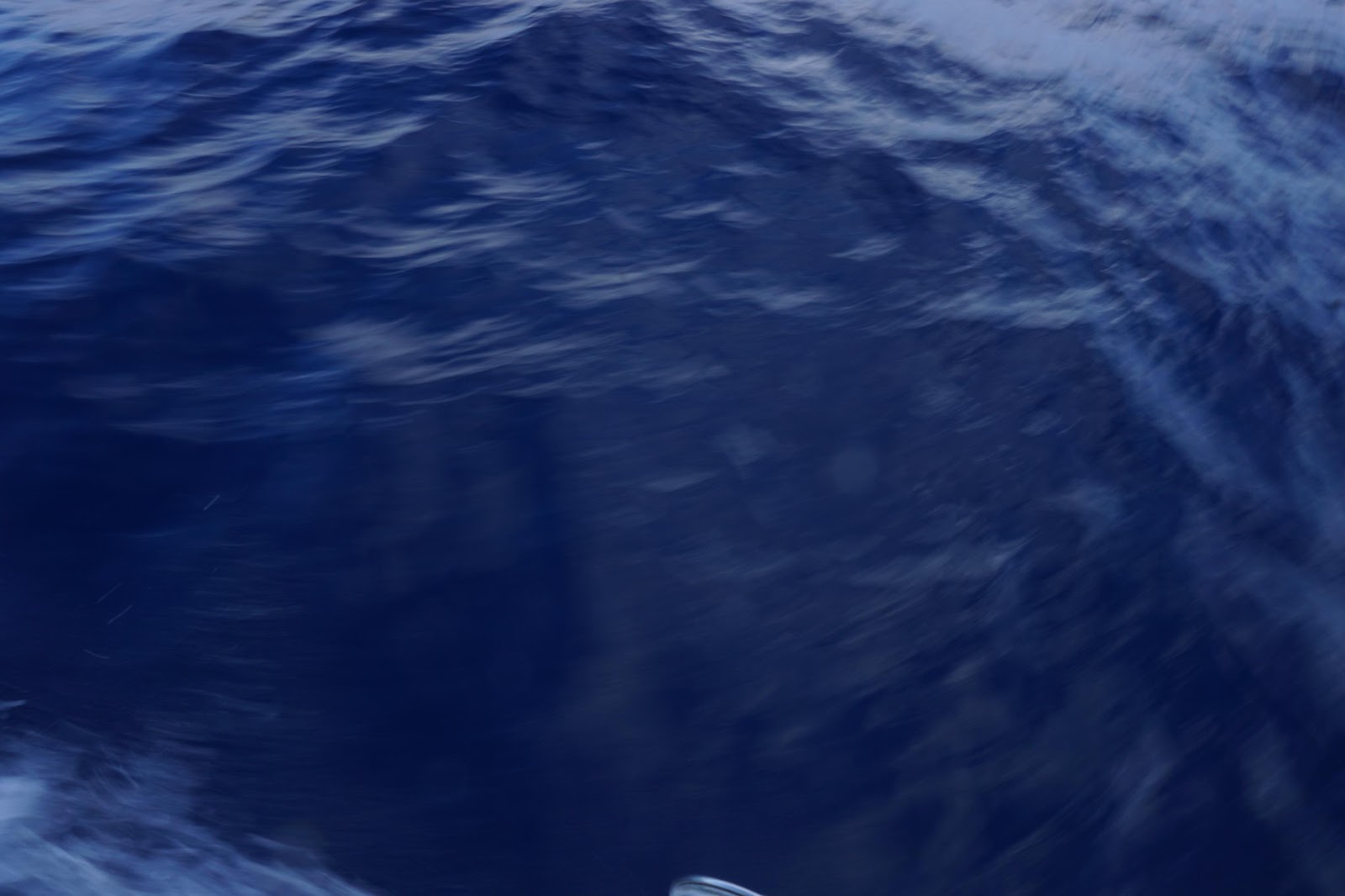 Maya Weeks is a writer, artist, and geographer from rural California working on marine debris as capital accumulation, climate change, gender, and logistics. Catch Maya on a surfboard or a sailboat or on Twitter at @looseuterus*All images in this piece are by Maya Weeks